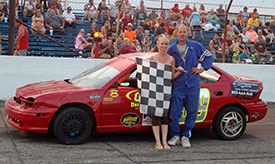 Jerry Dane was perfect through the first three races of the Front Wheel Drive Oval Division, but had not returned to the winner’s circle in four weeks.That changed last Saturday at Anderson Speedway as Dane jumped into the lead from the fourth starting position and led the entire distance.Behind Dane there was a see-saw battle for the second through fifth spots between Billy Hooten, Jeff Williams, Dylan Hoppes and Marshall Clark.Hooten never surrendered the second spot but was challenged for the position by Clark and Williams.Williams and Clark swapped the third spot a total of three times many times running side by side for several laps.Dane won by a half-second over Hooten with Williams claiming the third spot followed by Clark and Jared Keller.“The car hasn’t been right,” Dane said of his absence from the Tim Thompson Nationwide Insurance Winner’s Circle. “We’ve made some adjustments.“Some of the guys got slowed down by traffic,” he said of his hottest pursuers. “I was fortunate to get out front.”Keller recorded his third quick time of the season with a lap of 15.52-seconds, which was more than a tenth of a second faster than Dane’s lap of 15.66.