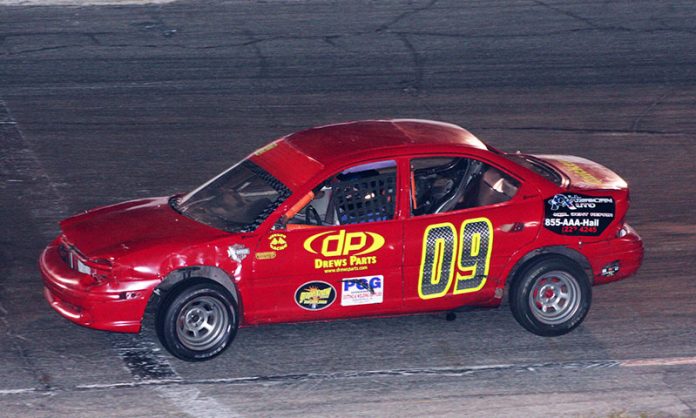 Jerry Dane capped his first Front Wheel Drive Oval championship the way he started the season with a feature win.

Dane set fast time during qualifications to start on the pole position and from there led the entire distance for his sixth feature win of the year.

The Arcadia driver opened the season with three feature wins, but didn’t score his fourth win until July. During that stretch Dylan Hoppes and Billy Hooten recorded multiple wins.

But last Saturday it was all Dane.

Dane took the lead at the waving of the green flag chased by Hoppes and Ronnie Phipps.

Hoppes night ended on the third lap when he lost a tire entering turn turn.

That set up a good battle for second between Hooten and Phipps.

The two drivers waged a spirited fight for the position, never separated by more than a couple of car lengths. Hooten took the position on lap 14 with an inside pass entering turn one. Ten laps later Phipps passed Hooten entering turn three to claim the second position.

Jared Keller and Cody Riley rounded out the top five.

“I just wanted to stay in front of Ronnie (Phipps),” Dane said in the Tim Thompson Nationwide Insurance Winner’s Circle. “I knew he had a fast car.

Phipps scored the win in the first heat race leading from the start, with Hooten charging through the field early in the contest.

Hooten was running fourth after the opening circuit and then passed Hoppes and Elliott McKinney before the halfway point.

Phipps went on to record a comfortable win followed by Hooten, Dane, McKinney and Hoppes.

Brandon Lee Cook recorded the victory in the second heat race taking the point when Riley spun while leading.

Riley recorded to run as high as second when he was black-flagged for turning laps faster than his qualifying time.