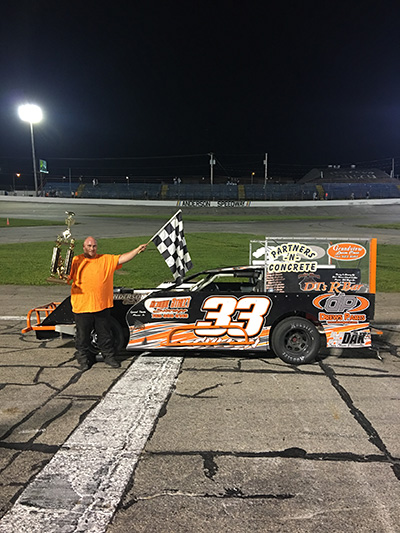 After years of attempting to win the National Crown, Shawn Cullen used a lot of patience to score the victory.

But the road to the victory on Edgewater Woods Alzheimer’s Awareness Night at Anderson Speedway was not a smooth one.

For 22 circuits Cullen put pressure on leader Ronnie Phipps repeatedly attempting to get to the preferred inside line. At one point with 20 laps remaining Cullen was able to pull alongside of Phipps, but a lapped car blocked the effort.

With six laps remaining Cullen got a run on the outside of Phipps and made the pass for the lead coming off the fourth corner.

Before the race was a lap old the red flag waved when Elwood driver Bruce McFall made hard contact with the protective water barrels in turn one.

Then on lap two the front runners tackled in turn two bringing out the caution flag for debris, Cullen and defending National Crown champion Swinford went to the pits for repairs.

Phipps took the lead at the start chased by Beaver, Curtis Chapman, Scharfer and Cullen.

The third and final caution flag waved on lap 16 when Chapman took evasive action to miss a crash in the crossover and was collected by Andy Keller.

Baledge grabbed the lead at the start with Marcum moving into the second spot with an outside move through the first two corners of the race.

For the next 35 laps Marcum stayed close to Baledge who twice cut inside of slower traffic through the corners to maintain the lead.

Following Baledge and Marcum to the checkers were Spillers, Danny Trent and Rich Segvich.

Brad Cain might not have appeared as the driver that was going to record the victory in Thunder Car action, but as misfortune befell three other leaders, he emerged as the victor.

That put Earl Adams on the point with Randy Hoppes in hot pursuit, but the two tangled on lap 22 and were subsequently sent to the rear of the field.

Cain held on Adams and Hoppes at the finish for his second feature win of the year. Tyler DeHart and Jeremy Threet rounded out the top five.

James Edsall III led the entire distance holding off a persistent John Robbins for the win in the first appearance of the cars in 2017.

The key point in the race took place on lap 15 on a restart in which Edsall got the jump on Robbins to maintain the lead. Alan Edsall, Dave Osborn and Mark Dietzen rounded out the top five.