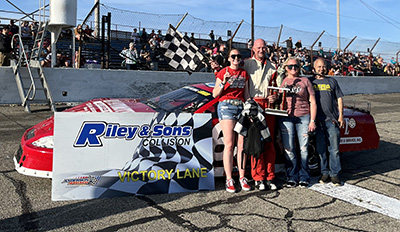 For the first time since 2004 Muncie competitor Jim Crabtree Jr. claimed a victory at Anderson Speedway. But until the final stages of the race the outcome of the McGunegill Engine Performance Late Model feature was unclear.

With defending series champion Jeff Marcum not competing on Saturday, it opened the possibility of a first-time winner emerging. Muncie’s Buddy Davis set fast time during qualifying edging Crabtree by .04-seconds. The invert put Kevin Gross and Jeff Whaley II on the front row with Gross jumping into the lead at the start chased by Whaley and JP Crabtree with Jim Crabtree running outside the top five. Gross spun coming off the fourth corner on lap 26 which put Whaley on the point chased by Crabtree and Davis with Davis moving into the second spot on the restart. For the next 13 laps Davis looked for a way to take the lead from Whaley when the two made contact on lap 39 which sent Whatley spinning and relegated both drivers to the tail of the field. That put Jim Crabtree into the lead with Cassten Everridge and JP Crabtree in the top three. An incident on the front straight on the final lap involving Gross, James Butler and Mike Sargent resulted in a two-lap shoot-out for the win.

Jim Crabtree went on to win by .6-seconds over Whaley with Evenridge rounding out the top three. “That’s a long time,” Crabtree said in the Riley & Sons Victory Lane. “We just got really lucky with the other guys having some problems.” He said the car was a little tight in the corners and the team still has some work remaining.

In the Noble Wine & Spirits Thunder Car 100-lap James Kirby III turned in a dominating performance in a race of attrition. Kirby set fast time during qualifying and accepted the challenge of starting from the back of the field and shooting for a $200 bonus with a victory. Defending series champion Jimmy Kirby took the early lead pursued by Ronnie Rose and Ricky Craig. By lap 6, James Kirby III was running inside the top five. Rose returned on lap 28 and the caution flag waved for the second and final time on lap 30.James Kirby III chased his father for several laps before making the decisive pass on lap 33 and leading the remainder of the way. “My dad is always fast,” Kirby said in the winner’s circle. “I knew I would have to work hard to get around him.” Jimmy Kirby said his car got loose in the corners because the tires were used up trying to hold off his son.

Terrill Willhoite was awarded the victory in the Marcum’s Welding Front Wheel Drive feature when Elliott McKinney was penalized one position for jumping a restart on lap 15. Nick Hanna, Thomas Rogers and Thomas Winger rounded out the top five.