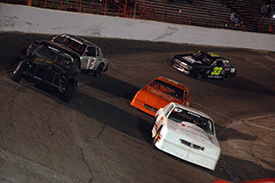 Anderson Speedway returns to action on Saturday, May 3 with CRA Street Stocks, Front Wheel Drives Oval, Thunder Roadsters and Super Karts kicking off the Month of May.The Stealth Trailers CRA Street Stocks Powered by JEGS.com will make their first visit of the season at Anderson Speedway. The feature event will be a 75-lap showdown serving as a tune-up to the 200-lap feature set for June. This marks the third event of the young CRA season with Jason Atkinson taking the victory at Lucas Oil Raceway at Indianapolis and Josh Poore the 200-lap main event winner at Shady Bowl (OH) Speedway. In the Anderson Speedway Street Stock division, Poore scored the main event victory on April 12 over Dustin Burge with James Kirby rounding out the podium finishers. Three victories have placed Jerry Dane in the first position in the Front Wheel Drive Oval division. He holds a 57 point advantage over Brandon Cook with Jared Keller just one marker behind in third spot. The remainder of the top five includes Billy Wooten and Austin McKinney. Chris Weddel will be chasing his third consecutive victory in the Thunder Roadsters on Saturday night. James Edsell lll and Marty Griffin have split honors finishing in second position and look to end Weddel’s winning streak. In the season standings, Weddel leads Edsel by three points with Griffin ranked third, 21 points behind. The Super Karts will return to the high-banked quarter-mile oval. In the first appearance on April 5, Kenny Smith visited the winner’s circle. Despite an invert of the six fastest qualifiers, Smith charged from the sixth on lap one to run second to Brad Kares. Two laps later Smith made the race-winning pass. At the finish, Smith was followed by Kares, Angie Goodin, Reynolds and Michael Goodin.On Saturday, May 3, spectator gates open at 5 p.m. with the racing beginning at 8. Admission is $12 for adults and $4 for kids ages 6-12. Children five and under get in free.