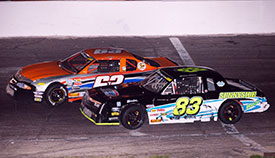 Racing action returns to Anderson Speedway on Saturday, June 21 with the Stealth Trailers CRA Street Stocks Powered by JEGS featured in a 200-lap event. This is the third and final event of the CRA Street Stock Triple Crown Series, which is three 200 lap, $3,000 to win events. Other divisions in action at Anderson include NASH FM ThunderCars, Front Wheel Drives Oval and Thunder Roadsters.

Anderson’s Josh Poore got the win in the first event of the Triple Crown on April 19 at Shadybowl (OH) Speedway holding off hard charging Jimmy Kirby to get the win over the 30 car field. Owensboro, Ky., native Brett Hudson got the win in the second event at Kentucky Motor Speedway on May 25, besting a 33-car field.

In addition to the $3,000 to win for each event, there will be a Points Champion Crowned on Saturday night from the three events who will receive a $1,000 bonus. Second in points will receive a $500 bonus, then there will be another $500 bonus from a random draw from the cars that attended all three events. Crumrine Buckle Manufacturing will also award the overall Triple Crown Point’s Champion with a specially designed buckle.

To date Saturday’s event has already attracted 28 pre-entries, with a few more expected in the days leading up to the event. Topping the list of entries is Shadybowl winner Josh Poore and Kentucky Motor Speedway winner Brett Hudson. Triple Crown point’s leader Jason Atkinson is also entered. Atkinson has a slim one point lead over Dustin Burge, who is also entered, in the Triple Crown points. The same two are also battling for the series Season Championship where Atkinson holds a 36 point lead over Burge, the 2013 series Champion, after four events. Atkinson won the series season opener at Lucas Oil Raceway on April 6. Poore won the series event at Anderson Speedway on May 3.

The Thunder Roadsters return for their fifth race of the season. Chris Weddle has scored two wins while James Edsall lll and John Robbins visiting the winner’s circle once.