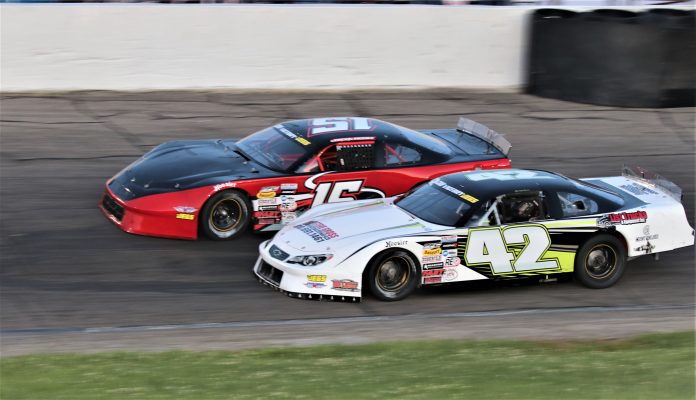 Previous winners in the touring series at Anderson Speedway include Tommy Cook, Jeff Marcum and Brandon Varney. Already locked into the Chase field are Austin Coe and Tanner Jack based on victories at Mt. Lawn Speedway and Lucas Oil Raceway. The championship race will take place at Winchester Speedway on Oct. 10. The four drivers seeking to join the championship field include 2007 champion Bill Hutson, Cassten Everidge Kent Carson and Cory Adams.

A champion will be crowned in the Champion Racing Association Jr. Late Model Division where Katie Hettinger is the most recent winner, giving her two victories on the year. Anderson Speedway winners this year have been Jordan Riddick and Keegan Sobilo.

The Hart’s Auto Crown Vic’s are on the racing program where Matthew Adams will be seeking a third consecutive feature win. The Front Wheel Drive competitors will return for Figure 8 action where Elliott McKinney has won twice with Randy Owen and Ricky Craig also scoring feature wins.

Qualifying takes place at 5:30 p.m. with racing action at 7 p.m. Adult admission price is $12, $5 for children between the ages of 6 and 12 and children 5 and under are admitted free.