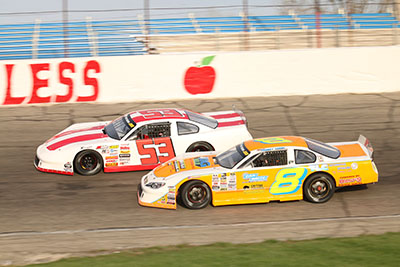 There is a lot at stake when the CRA Sportsman Late Models and Street Stocks make their final appearance at Anderson Speedway. This is the final event for both divisions at Anderson Speedway on Saturday Night Racing presented by the Herald Bulletin and Cintas for drivers to lock into the Chase championship at Winchester Speedway on Oct. 12.

Four Sportsman Late Model drivers will be battling for the final two spots in the Chase race and will be doing battle for 75-laps on the high banked quarter-mile oval. Regular season champion Cory Setser is locked into the title event along with Billy Hutson, who won at Winchester Speedway on Labor Day weekend. Zachary Tinkle, the McGunegill Engine Performance Late Model champion at Anderson Speedway will be fighting for a spot in the Chase, coming off two consecutive races where he failed to finish. Anderson Speedway regular Kent Carson is hoping to advance along with Austin Coe and rookie Brian Demland. Three-time Anderson Speedway late model champion Jeff Marcum won in April and Ronnie Rose is the most recent winner at the local racing facility.

The CRA Jr. Late Models will conclude their season on Saturday with the Thunder Roadsters also on the racing program.Qualifications are set for 5:30 p.m. with racing at 7 p.m.