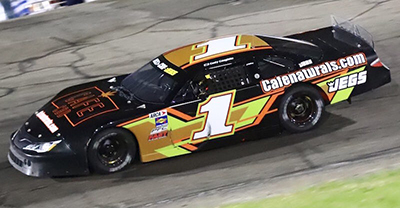 There was plenty of rubbing during the CRA Super Series event at Anderson Speedway with Cody Coughlin emerging the victor. Coughlin won for the first time in the series since 2016 Saturday in the Mitch Smith Auto Service 125 presented by Perfecto by leading the final 48 laps.

Throughout the 125 lap race on the quarter-mile bullring the drivers didn’t fail to use the front bumper to gain the preferred inside line. Coughlin started eighth in the 18-car field and by lap 26 had cracked the top five. He moved into the second position behind Scottie Tomasik on lap 68 when pole sitter Travis Braden brought out the caution flag for a broken sway bar. Coughlin took the point on lap 77 with an inside pass of Tomasik coming off the fourth corner. The Ohio driver had to survive five more restarts before taking the checkered flag.

Challenging for the win was rookie contender Mason Keller, Dalton Armstrong and Casey Johnson and Kyle Crump. Following the final restart on lap 115 Coughlin pulled away from Keller by 2.4-seconds with Armstrong, Johnson and Crump rounding out the top five.

Braden was hoping to record his first career win at Anderson Speedway and led the first 25 laps before giving way to Tomasik who took advantage of a restart to make the pass in the high groove on the front straight. Johnson, the 2019 ARCA Midwest Tour champion, set fast time in his first visit to Anderson Speedway.

Indianapolis driver Andrew Teepe started the 2020 season opener for the Vores Welding & Steel Street Stocks by winning at Anderson Speedway for the first time since 2017. Teepe set fast time and started sixth for the feature with defending champion Josh Poore and Dawson Phillips starting on the front row. Poore jumped into the lead chased by Phillips and Alex Ware. By the time the first caution flag waved on lap 14 Teepe was up to third behind Poore and Elwood’s Jacob McElfresh. On the restart Poore’s car suffered a flat left rear tire that allowed Teepe to dive inside of both front runners to take the lead. Poore would suffer a second flat left tire on lap 21. Teepe pulled away over the final 19 laps to win by 3.8-seconds over McElfresh and James Kirby III.