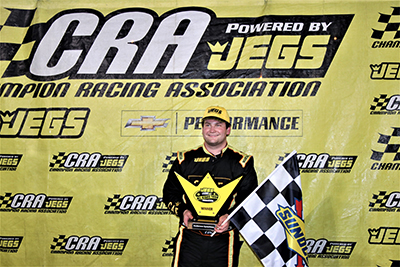 Ohio veteran driver Cody Coughlin dominated the Sport Clips 100 presented by U.S. Army to record his second CRA JEGS All-Stars Tour victory in 2021. Coughlin set fast time during qualifying Saturday with Tanner Jack and Mason Keller close behind. The invert saw Billy VanMeter take the lead at the start chased by Keller, Coughlin and Chase Burda. Jack’s night ended on the second lap when his Chevrolet made contact with the turn three wall.

In the first 30 laps the race was slowed by four caution periods with Keller bringing out the caution flag with a spin on the back straight. On the restart Coughlin used the outside line to pass VanMeter on the front straight and started to pull away from the field. The race was red-flagged on lap 59 because of rain just after VanMeter spun in turn two and made contact with the car of J.P. Crabtree. After the rain delay Coughlin again took control of the race with Keller recovering from the spin earlier moving into the second spot on the restart passing Tony Brutti. Coughlin went on to win over Keller by 2.469-seconds followed by Josh Cave, Crabtree and Steve Dorer. Coughlin won earlier in the season at the Nashville Fairgrounds Speedway.

Kameron Gladish took the lead from Jack Macenko on the fifth lap of the Day Transportation Mel Kenyon Midget Series and recorded his first feature win of the year. There was tight racing for position between Gladish, Macenko, Trey Osborne and Colin Grissom. Fast qualifier Aryton Houk opted to take the Scudder Performance Award challenge by starting on the tail of the field. Houk was seeking his third win of 2021 and would have captured a $200 bonus if he won. Houk moved into the sixth position on lap nine and by the halfway point was running third after passing both Osborne and Macenko. With Gladish out front and Grissom a close second, Houk was unable to finish above the third position. Gladish won by 1.2-seconds over Grissom.

After finishing three times in the runner-up position Ron Phipps scored the feature victory in the ThunderCar division with Earl Adams and Michael Phipps rounding out the top three. Indianapolis driver Donald VanValkenburg III recorded his second feature win of the year over Jess Holiday and Kamden Creek.