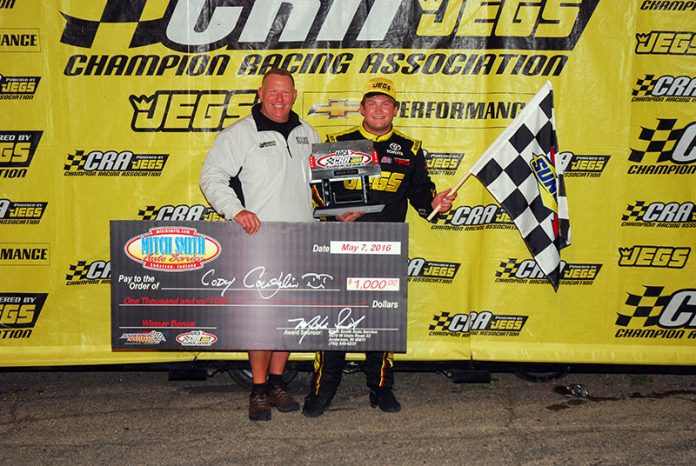 Brian Ross pulled into victory lane at Anderson Speedway in 1997 to mark the first ever Champion Racing Association event, Saturday Cody Coughlin added his name to the list of winners.

In a race with lots of starts and stops in the action, slowed by 14 caution periods, Coughlin made the deciding pass of the race on lap 96 when leader Dalton Armstrong left the low groove open.

Coughlin slipped past going down the back straight and led the final 29 laps to win by 1.5-seconds over Armstrong and California driver Zane Smith.

Coughlin made it two CRA Super Series wins in a row to increase his point lead over Armstrong, the leading rookie of the year candidate.

Thanks to the invert Armstrong started on the outside of the front row next to Wes Griffith Jr. in identically prepared Scott Neal Racing Ford.

Armstrong took the lead and stayed out front for the first 31 laps. Griffith took the lead on lap 32 with an inside pass exiting turn four.

Coughlin started fourth in the 16-car field and grabbed the lead on the 42nd circuit when Griffith spun in turn one and Bret Holmes made contact with the outside retaining wall.

The longest green flag segment was 39 laps from the 44th to 83rd circuit with Coughlin holding down the top spot until lap 85 when Armstrong exited a perfect bump and run to slip inside exiting the fourth corner and take over the lead.

From there Coughlin stayed glued to the rear bumper of Armstrong and when the Indiana driver drifted high Coughlin was there to take advantage of the mistake.

Smith making his first ever start at Anderson Speedway posted the third quick time during qualifications and ran in the top five for the entire 125 laps.

Wisconsin driver Dennis Prunty finished fourth despite having to come back through the field following an early incident.

Trent Snyder in the Mitch Smith Automotive sponsored Chevrolet started 15th and finished fifth. Snyder was also relegated to the tail of the field after tangling with Jordan Pruitt on lap 35.

Harts Figure 8
Jeff Swinford appeared heading toward a comfortable win in Harts Figure 8 Division action when a caution period changed the outcome of the race.

Swinford took the lead at the start and pulled away to a wide margin over Shawn Cullen, a margin that appeared insurmountable.

The caution flag waved on lap 15 when third place running Nick Warner lost an engine and that erased Swinford’s lead.

With oil dry on the low groove through the first and second corners, Swinford made a decision that would cost him the victory.

He opted for the outside line, giving Cullen the preferred line. Cullen took advantage of the decision to win by 1.1-seconds over Swinford with Camden Creek finishing third.

Thunder Cars
Randy Hoppes made his first appearance in a Thunder Car this season and led all 30 laps to record the victory.

At the start Hoppes was able to get around pole sitter Bruce McFall and was never seriously challenged winning by 5.2-seconds over Jeremy Threet.

Threet passed McFall for the second spot on the final lap of the race.