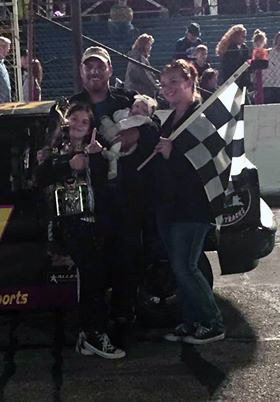 Everyone has those memories from their childhood that they like to pass on to their children. It might be that vacation you took or an experience that you want to pass along. Racer Ron Phipps wants to pass the same memories to his kids he had growing up at Anderson Speedway.

“I looked forward to being able to help my dad and uncles in the garage each week,” said Ron Phipps. “They would give me small tasks like beating out the fenders. It just fueled my racing addiction growing up and watching them race. Every week I just looked forward to going to Anderson Speedway on Saturday Night.”

Entering the 2015 season, Jeff Williams asked Ron Phipps to drive a pro compact for his team. Over the course of the first season Ron had four top 5’s and won the championship. After that championship, he joined teams with longtime car owner, Mike Whitaker. He first started out helping on the crew but then became a backup driver on the team with Matt Tharp. In his second season with Whitaker Motorsports, Ron was able to pick up his third Anderson Speedway driving championship. After that successful season Ron Phipps and Mike Whitaker decided to tackle a new challenge.

With the help of many supporters, the team decided to go ThunderCar racing at Anderson Speedway. In his first season driving ThunderCars he was able to achieve 5 top 5’s and 7 Top 10’s. The team was also able to win the rookie of the year honors in the division. 2019 turned out to be a much more challenging year for the team.  Some disappointing races and accidents thwarted a run for the championship.

“We want to go out and compete for wins in 2020,” Ron Phipps. “We haven’t been able to win in the ThunderCar division.”

Ron is continuing to make it a family affair at Anderson Speedway. His wife, Asia Phipps, got hooked on racing a couple years back and now competes in the Marcum Welding Front Wheel Drive Division. In her first season competing full time, she finished sixth in points.

“When my wife got hooked it extended the racing bug in our inner family,” explained Ron Phipps. “My oldest daughter, who is 12, is already asking me if she can race when she turns 14. The racing bug has definetly spread to my daughters. My wife has shown my girls and hopefully others that anyone can race.”

Ron Phipps will be on track for the ThunderCar 100 at Anderson Speedway on April 4th. Racing will begin at 6:00pm. Adult tickets are $12, Kids (6-12) $4, and ages 5 and under are free. Tickets will be available for purchase on the night of the race.