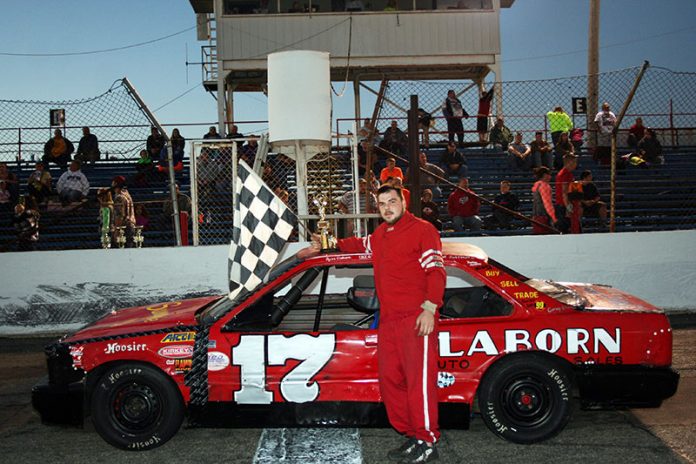 It was a night of firsts for New Castle driver Ryan Claborn in the Pro Compact division at Anderson Speedway.

Claborn started the night by shattering the qualifying mark set by Chris Jennings of 14.949-seconds established on May 11, 2013 with a lap of 14.740-seconds.

Claborn took the lead from Chris Teepe with an outside move entering turn three to score his first victory in the Pro Compact division.

Teepe led from the waving of the green flag, but got loose in turn two which cost him all his momentum that allowed Claborn to streak past on the outside down the back straight.

Following Claborn and Teepe to the checkered flag were Jeff Williams, Rodney Sutton and Jerry Dane.

In his heat race Claborn was running fifth after the first lap but quickly started a climb to the front.

He passed Jerry Dane on the second lap, Dylan Hoppes a lap later, followed by a pass of Jeff Williams.

From there Claborn started to close on early leader Ron Phipps, making the pass on the sixth circuit with an outside pass on the front straight.

Andy Keller recorded his first win of the year in the second heat race leading from start to finish.

Behind him on lap five Jesse Thomas spun after contact with Austin McKinney on the front straight while battling for second.