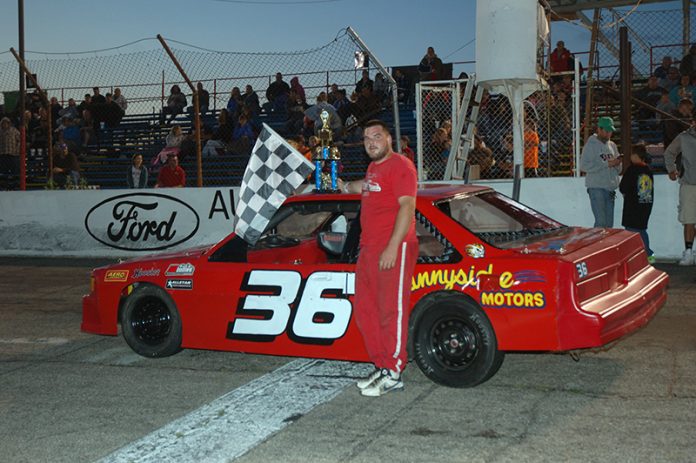 On a night of firsts in Marcum Welding Pro Compact competition at Anderson Speedway, Ryan Claborn claimed the biggest prize of the night.

After qualifying third quick, Claborn started on the outside of the front row next to Terry Neal.

Before a lap could be completed the yellow flag waved when TJ Fannin bounced off the third turn wall, resulting in a complete restart.

On the Interstate Auto Auction restart, Claborn jumped into the lead and set sail on his first feature win of the year.

Nick Warner who started on the inside of the second row, initially fell back to fifth after the first lap and gained a position on the ninth circuit by passing Matt Tharp coming on the front straight.

For the next 15 laps the running order remained the same until Warner passed Neal for second on the penultimate lap with an inside pass entering turn one.

At the checkers Claborn won by 3.8-seconds over Warner followed by Neal, Tharp and Trent Gossar.

“This feels great,” Claborn said following the win in the AutoFarm McCrocklin Farm Winner’s Circle. “I’ve had a monkey on my back for a while.”

In the first of the two heats races with 17 Pro Compacts in the pit area, Gossar took the lead from Billy Hooten with an outside pass on the front straight on the third circuit to record his first win of 2015.

Hooten rapidly dropped out of the top five as he was passed by Neal, Claborn, and fast qualifier Jared Keller.

Claborn passed Keller on the white flag lap with an outside pass on the back straight.

Following Gossar to the stripe were Neal, Claborn, Keller and Warner.

In the second heat race, Pro Compact veteran driver Marshal Clark led the entire way to record his first win of the year.

Clark was followed to the checkers by Cory Slavey, Richie Tharp, Fannin and Jeff Kidd.