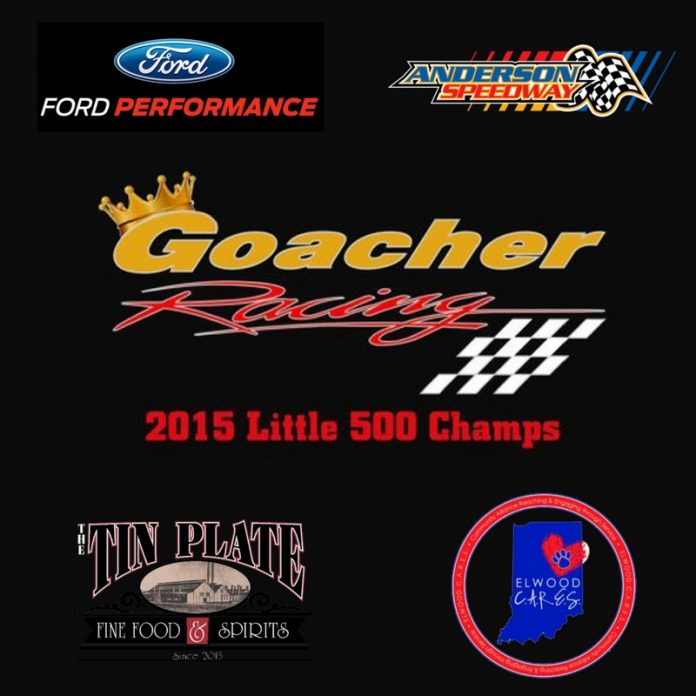 Elwood, Indiana (January 11, 2018): There’s nothing better in racing than being able to root for your own race car. With this in mind, the Elwood C.A.R.E.S. organization has teamed up with former Pay Less Little 500 presented by UAW-GM champion race team owner, Jason Goacher. Goacher Racing will be fielding a second entry for the 70th Pay Less Little 500 presented by UAW-GM at Anderson Speedway on May 26, 2018. In preparation for this historic event, Goacher Racing and Elwood C.A.R.E.S. are proud to announce Ford Performance driver Chase Briscoe as the pilot of the 7G. Briscoe currently drives for Roush Fenway Racing in the NASCAR Xfinity Series. The Goacher Racing/Elwood C.A.R.E.S. 7G will be known as “Heart of Hoosierland Special”.

Todd Jones, Mayor of Elwood, Indiana stated “I see this as a great opportunity to showcase our community to the country. With this being the largest single day sporting event in Madison County, it is an honor to root for a car and driver representing the great businesses of our city”.

Jason and Traci Goacher, both Anderson, Indiana natives have been fielding a car for the annual race that is held the night before the Indianapolis 500 for many years. They have one Pay Less Little 500 presented by UAW-GM victory to their credit with Chris Windom in 2015. This will be their first-time fielding two cars for the race.

Chase Briscoe hails from Mitchell, Indiana and grew up in a racing family. Briscoe stepped into 410 sprint cars at the young age of 13. At the age of 14 Briscoe won his first sprint car race. In 2016 he competed for Cunningham Motorsports in ARCA. He won the 2016 ARCA Championship fueled by 6 wins throughout the season. In 2017, he moved up to race for Brad Keselowski Racing as a Ford Performance Development Driver. Briscoe competed in the NASCAR Camping World Truck Series picking up a win, and claim Rookie of the Year.

Pay Less Little 500 presented by UAW-GM:
The quarter-mile, Anderson Speedway was built in 1948 by legendary promoter Joe Helpling and a large group of men working for 25 cents per hour. Although Helpling had planned on constructing a bowling alley and recreation center on his 32 acre tract at 29th street and Pendleton Avenue, two Anderson city councilmen suggested that he instead consider building a racetrack. Helpling had never seen a race of any type, so he traveled to Armscamp Speedway in Alexandria and 16th Street Speedway in Indianapolis (both tracks are no longer in existence) to get some ideas. After those visits, the decision was made: it was racing.

In 1948, Sun Valley Speedway (as it was originally known) officially opened for competition. The Roaring Roadsters and AAA Midgets were the most popular programs. Helpling decided to present an idea to the Mutual Racing Association, which was the sanctioning body for the Roadsters. A press conference was held in early 1949 at the old Anderson Hotel, where Helpling unveiled his idea to start 33 roadsters in a 500-lap event. Everybody scoffed and said that it would never work. Pressure was put on Helpling to reduce the race length to 200 or 300 laps. Because it would probably cost $800 per car for tires and no car would finish. “Then we’ll run bicycles,” Helpling said.” Because we’re gonna have a Little 500 and that’s the way it’s gonna be.” In the inaugural event, to the surprise of most, 18 roadsters finished. Five roadsters did not even make a pit stop. Sam Skinner won the inaugural event. 70 years later it is the most prestigious pavement sprint car race in the country.