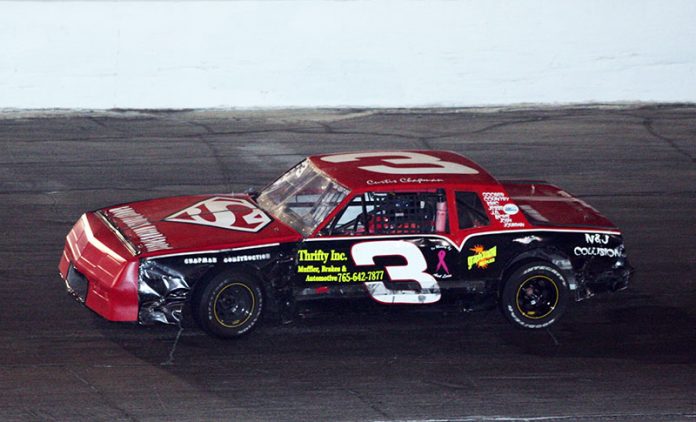 Curtis Chapman hit a hot streak in the final month of NASH-FM Thunder Car competition to repeat as the division champion at Anderson Speedway on Saturday.

Chapman and Robbie Wyman were locked in a season long battle for the top spot in the point’s chase. Chapman grabbed a one-point lead over Wyman on Sept. 6 and claimed the title with a dominating performance in the feature race.

The Anderson driver on Saturday set fast time and led all 30 laps to score his fourth victory of the year.

Trent Gossar ran second the entire distance but was in a heated battle with Wyman.

Wyman was glued to the rear bumper of Trent Gossar in a battle for second place, but was never able to get inside to make the pass.

Rob Allman was running fifth on lap 22 when he pitted with a mechanical problem.

Following his win, Chapman and Wyman exchanged a handshake and embrace at the crossover.

“This is awesome,” Chapman said in the Tim Thompson Nationwide Insurance Winner’s Circle. “I want to thank Robbie Wyman for racing me hard all year. It was fun.”

In the first of two heats, Allman made an aggressive move to grab the lead from Lonny Burton, but experienced an electronic problem in his Dave Hacker owned mount and spun while exiting the track.

On the restart Burton took the lead from Chapman chased by Nick Warner and Wyman. Wyman slipped inside of Warner on lap three to claim the third spot.

Austin Russell took the lead from Josh Ebert with an outside power move down the back straight on lap four to record the victory in the second heat race.

Eventually Ebert was black-flagged for turning laps faster than his qualifying time and finished fourth behind Jimmy and Austin Hawkins.