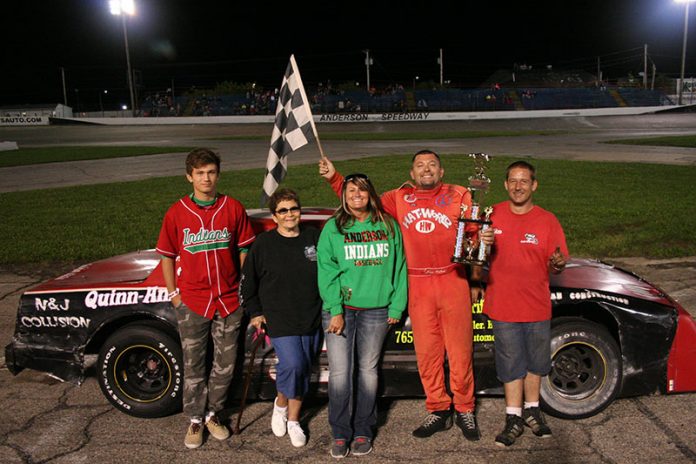 Curtis Chapman used an outside move on race leader Robbie Wyman on a restart on lap five and went on to record his third feature win in the NASH-FM Thunder Car division.

With the victory Chapman reduced Wyman’s points lead to single digits with the Season Championships on tap on Sept. 20.

Wyman took the lead from Brian Lewis with an outside move that saw Chapman also make the pass as the two front runners in the season championship fight battled for the lead.

Chapman used his front bumper on the back of Wyman’s car several times in turn three before the caution flag waved when Jimmy Hawkins bounced off the turn two wall.

Wyman was passed by Lonny Burton on lap eight to come home in second followed by Wyman, Lewis and Randy Hoppes.

“Never give up,” Chapman said in the Tim Thompson Nationwide Insurance Winner’s Circle following the win.

In the first of two heat races, Randy Hoppes took the lead at the start of the race for the four fast qualifiers.

Burton ran second for the entire distance with Chapman slipping around Wyman for third.

Brian Lewis recorded his first career win in the second hear race by beating Kyle Allmond to the checkered flag on the final lap.

Lewis was on the outside of Allmond as the pair exited turn four and one by 0.088-seconds.

Austin Russell finished third, despite a spin on the final lap with Hawkins and Megan Tharp rounding out the top five.