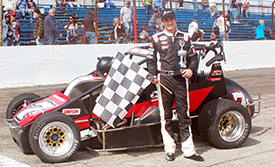 Caleb Armstrong used a bump and run move with 17 laps remaining to win the fourteenth running of the “Glen Niebel Classic” at Anderson Speedway on Sunday.Armstrong, the fast qualifier, was running second to Aaron Pierce following a caution flag on lap 66. With 18 laps remaining Armstrong bumped Pierce coming off the fourth corner and made the inside pass entering turn one.Pierce stayed glued to the rear bumper of Armstrong’s sprint car, but came up one-second short of a third consecutive win in the Glen Niebel Classic.Pendleton resident Travis Welpott finished third with Jarett Andretti and Kyle Hamilton rounding out the top five.The early lead was taken by Jason Fuller, who was passed by Chris Neuenschwander with an inside move entering turn one.Armstrong was strong early in the race using the outside groove to pass Welpott and Fuller to run fourth at the halfway point.Pierce took the lead from Neuenschwander on lap 63 getting to the low groove entering turn one. Neuenschwander’s car was losing grip in the right rear tire and was having handling problems through the corner.Neuenschwander spun on lap 66 after he was bumped by Armstrong, which set the stage for the final pass for the lead.“I want to apologize to Chris (Neuenschwander) and Aaron (Pierce) for what happened,” Armstrong said. “The brakes were going in and out. “This is a good preview for the Little 500.”Andretti started 13th in his first race at Anderson Speedway and aside for a slip with three laps remaining would have finished third.Pierce said after the race that Armstrong gave him more than a gentle tap to get him out of the low groove.He said if he caught Armstrong in the final laps, a similar move would have been attempted.“I wouldn’t crash him.” Pierce said.Welpott said his car was tight early in the race with a full fuel load but got better at the race progressed.Jason Fuller grabbed the point at the start, but the first caution flag waved on the initial lap when Doug Dietsch made contact with the outside wall.Neuenschwander took the lead on the eighth lap with an inside pass of Fuller entering turn one and by the halfway point Pierce was running second with rookie Kyle Hamilton running third.The second caution flag waved on lap 38 when Collin Cabre made contact with Welpott’s sprint car and made contact with the turn two retaining wall.There were three caution periods for a total of 25 laps and four lead changes among four drivers.Fuller recorded the win in the first of two heat races leading from the start with Cabre, Pierce, Armstrong and Matt Goodnight rounding out the top five.Florida driver Garrett Green won the second heat race by almost 3-seconds over Neuenschwander, Welpott, Hamilton and Andretti.

Michael Waltrip to race on the High Banks of Anderson Speedway