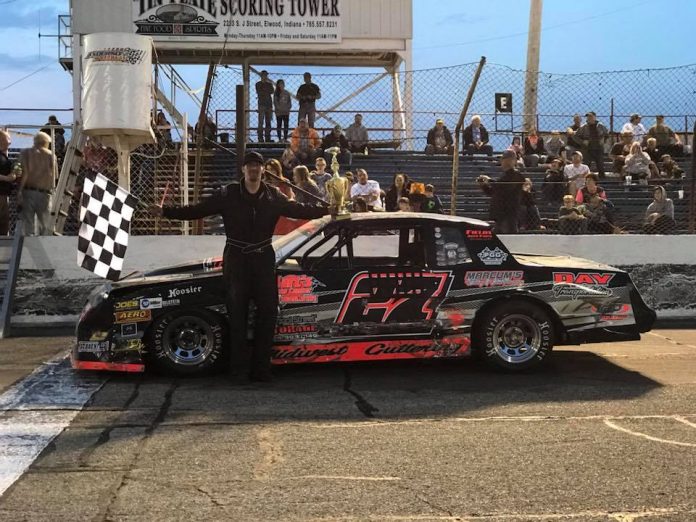 With qualifying playing a crucial role at Anderson Speedway must drivers setting fast times were able to prevail, but Travis Burge was the exception on Saturday.

On a normal race weekend there is an inversion of the top qualifying drivers dependent on the draw by the winner of the fast heat race. For the Spring Championships there was no inversion.

Indianapolis driver Danny Adams set fast time during qualifications in the Vore’s Welding & Steel Street Stocks with the top ten driver’s posting times within a half-second of each other.

Adams took the lead at the start chased by Burge and James Kirby. For the first 16 laps Adams was able to hold off Burge as the two battled for the top spot with Kirby, Shawn Cullen and Jacob McElfresh fighting for third.

On a lap 17 restart Burge used the high racing line in turn three to pass Adams for the lead with the caution flag waving for a third time when Weismiller tangled with Jaren Crabtree on the front straight.

Cullen passed Adams for second entering turn one and the running order was set through the end of the race although Cullen kept the pressure on Burge. Adams came home third followed by James Kirby and Jimmy Kirby.

Tight racing again highlighted the Thunder Roadster Division as for the third time in three races there was a different winner.

Muncie’s Rodney Oliver started from the outside of the front row and took the early lead from pole sitter Chad Cory with Dave Osborn, Marty Griffin and Jed Cotterman running in a tight pack.

With Oliver leading the way the outcome of the race was changed on lap 25 when he tangled with the car of Bryan Eberle on the back straight with Osborn being involved.

That put Cory into the lead where he was able to hold off a closing Griffin by two-tenths of a second for the victory. Osborn, Doug Dugger and Cotterman rounded out the top five.

Morristown’s Jeff Marcum took the lead from Kent Baledge on the third lap with an inside pass entering turn three and went on to record his second feature win of the year in the McGunegill Engine Performance Late Models.

Marcum pulled away to a comfortable lead with Danny Trent holding off Baledge over the final half of the race for the second spot.