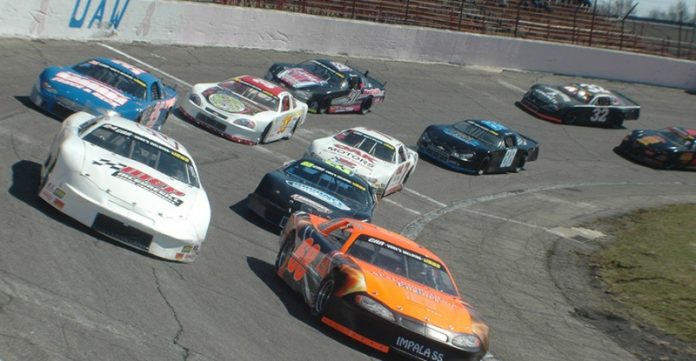 Brutti started third in the Concentrix 75 never falling any further back in the field and took the lead on lap 38 from early pacesetter KC Spillers on lap 38 with an outside pass on the back straight following a restart.

He had to hold off Jason Neal on two restarts, the final one coming on lap 69 to record the victory with Jeff Marcum coming home in third.

Spillers took the lead at the start chased by Brutti, Marcum, fast qualifier Danny Trent and Cory Setser. After five laps Trent moved around Marcum with an inside move entering turn one and closed on the two front runners.

Trent brought out the first of the three caution flags when his car suffered what appeared to be a broken right suspension part and he slammed into the outside retaining wall in turn four.

That gave Brutti the opportunity to take the lead by passing Spillers on the outside on the back straight. Spillers brought out the second caution flag when spun coming off turn four on lap 43.

Brutti held off Marcum on the restart with Neal using the low groove to move into the second spot entering turn one. The final caution flag waved on lap 69 when Setser spun in turn four.

Once again Brutti was able to maintain the lead on the restart with Neal, Marcum, RJ Norton and Shawn Bonar rounding out the top five.

Hoppes started on the pole position with Michael Whearl applying the pressure until lap 12 when he drifted high in the corner and dropped back to the fifth spot.

That put Burkhart in position to challenge for the lead during three caution periods and on each restart the two front runners would race side by side before Hoppes clearly retained the lead.

Frankton’s John Robbins continued to dominate Thunder Roadster leading all 30 laps to record his fifth consecutive win of the year.

Robbins was never seriously challenged for the point after starting from the pole position after setting fast time in qualifying. Doug Dugger, Rodney Oliver, Marty Griffin

and Dave Osborn rounded out the top five.

Shawn Cullen set a new track record during qualifying for the Hart’s Auto Figure 8 division and proceeded to record his first feature victory of the season.

Cullen took the lead from Joe Beaver with an outside pass coming off the second corner and pulled away to a comfortable win.