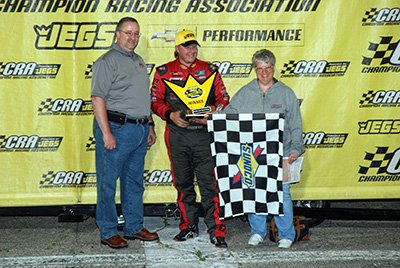 Kentucky driver Josh Brock is no stranger to Anderson Speedway once again driving to victory in the CRA JEGS All Stars Tour event. Brock started sixth in the 25 car starting field Saturday for the AERCO Heating & Cooling 100 never falling out of the top ten in the running order. He moved into the second spot following a caution flag on lap 49 with an inside move on Brandon Varney and five laps later he passed Wes Griffith Jr. to take the point. Brock then was able to maintain the lead through six restarts turning back strong challenges from Cody Coughlin and Steve Dorer. He won by .366-seconds over Coughlin with Dorer coming home in third followed by Mason Keller and Brandon Oakley.

With each wave of the caution flag the following restart brought about a scrambling in the running order as drivers battled for every advantage on the quarter-mile oval. Wes Griffith Jr. led the first lap from the pole position but was quickly passed by Brandon Varney with an outside move on the back straight. Griffith retook the lead on lap 32 with an outside pass of Varney with Brock running a solid third followed by Keller and Dorer.

Local product Colin Grissom took advantage of a restart to capture the Day Transportation Mel Kenyon Midgets feature. The fans at Anderson Speedway were treated to a thrilling two and three car battle for the lead. Fast qualifier Kameron Gladish took the lead at the start over Grissom and Jack Macenko. Gladish opened a comfortable lead in the early stages of the race but at the halfway point Grissom and Macenko  closed to make it a three Midget battle for the lead. With five laps remaining Macenko made wheel contact with Grissom and his night ended against the front straight retaining wall. On the restart Grissom grabbed the lead with an outside pass of Gladish and for the next nine circuits the two raced nose to tail. Several times Gladish looked to make an inside pass entering turn three but Grissom was able to maintain the top spot. Gladish made one final attempt at the win coming off the final corner but came up .173-seconds short with Trey Osborne, Ben Varner and Ryan Huggler rounding out the top five.

In other racing: Vores Compact Touring Series fast qualifier Kyle Stark took the lead on the sixth circuit of the 30-lap feature and took home the win. Stark was chased for the final 20 laps by Darek Morris with Gary Eaton Jr. coming home in third.

Jordon Riddick recorded his first career win in the CRA Jr. Late Models taking the lead on the sixth lap from Zach Wilhelm.Wilhelm and fast qualifier Katelyn Hettinger stayed glued to the rear bumper of Riddick’s Chevrolet but were never in a position to challenge for the victory.Riddick finished .246-seconds ahead of Wilhelm.