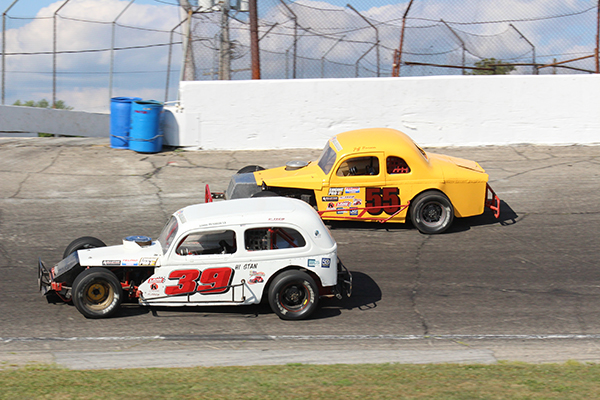 Bryne moved into the second spot on lap five with an inside pass of Peterson and Tom Boorsma gained a spot on the same lap.

Two laps later Tom Boorsma made an inside pass on Peterson entering turn three. At the same time Ryan Boorsma white walled the right side tires on the back straight wall.

Tom Boorsma went to the outside to pass Bryne coming off the second corner on lap 14 and two laps later took the lead for good with an inside pass of his son.

From there Tom Boorsma maintained a comfortable lead with Bryne nailing down the second spot on lap 18.

With the championship race winding down Anderson driver Ron Phipps has picked the right time to get on a hot streak.

Entering action on Saturday Phipps had a 15-point lead over Jeff Williams, a lead he would extend with his second consecutive feature win while Williams failed to complete the event.

But getting to the checkered flag was not a ‘Sunday drive’ for Phipps who was pressed for the final 15 laps by rookie Kyle Keeley.

Anderson’s Nick Warner took the lead from Matt Tharp five laps into the feature when for the third week Tharp’s ride has been plagued by mechanical woes.

A lap leader Keeley took the lead and started to build a comfortable lead over Phipps and Williams when the only caution flag waved on lap nine when Warner stopped on the back straight.

On the Ivy Tech restart Phipps got around Keeley for the lead and the two ran nose-to-nail to the finish. Keeley several times tried to get inside of Phipps, but the veteran driver wouldn’t surrender the low groove.

Andrew Cook recorded his first career feature win in Street Stock competition which is leading up to the final appearance of the CRA Street Stocks at Anderson Speedway next Saturday.

It was a perfect night for Cook who set fast time during qualifications, won the heat race and got the feature win.

Cook passed Kevin Rabenstein with an inside move entering the third corner with Joe Pulley getting around Rabenstein on lap six entering turn one.

Before he could lock down the win Cook had to hold off Pulley on an Ivy Tech restart with three laps remaining. Missy Baggienski finished third.

Domski could close to Tinkle’s rear bumper but was never able to get inside of the teenager to make the pass for the lead.

The Super-Cups make a final appearance on Oct. 8.