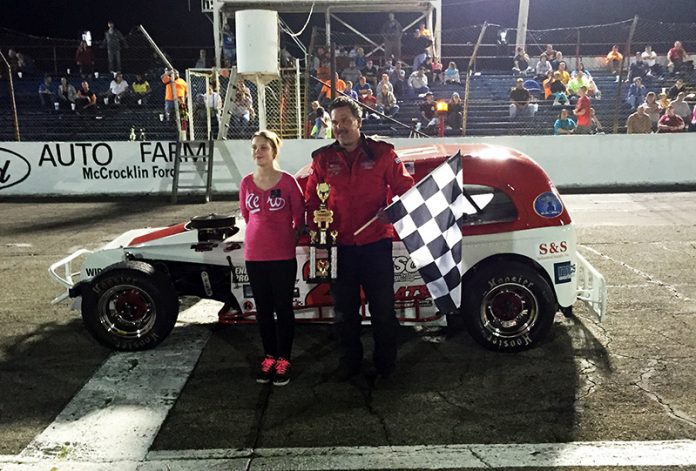 It was another historic night at Anderson Speedway with the Michigan based Vintage Racing Organization of American Modifieds making their first ever appearance.

The VROA uses pre-1950 body styles with an in-line six cylinder power plant to provide a throwback look to what racing looked like after World War II.

Fourteen teams made the trip from northern Indiana and Michigan on Saturday with Tom Boorsma scoring the first feature victory after passing Arnie Snyder with an inside move entering turn one with eight laps remaining.

Boorsma started outside the top five but had moved up to fourth after ten laps. On consecutive laps he used an inside move in turn one to pass Randy Pierson and Rob Parker to be running second.

“I love it,” Boorsma said of Anderson Speedway in the AutoFarm McCrocklin Ford Winner’s Circle. “It took some time to figure it out.”

Loren Peterson led all ten laps to win the first of the two heat races with Rob Parker, Loren Peterson III, Snyder and Dan Deyman rounding out the top five.

The second heat race provided plenty of action for the fans.

Andrew Bartoszek took the early lead chased by Boorsma and Pierson. Boorsma took the point on the fifth lap with an inside move down the back straight.

A lap later Bartoszek got loose on the back straight while battling for third, brushing the outside retaining wall and was collected by fast qualifier Jimmy Lawson.

Boorsma went on to win the heat race followed by Glenn Parker, Terry Byrne, John Evans and Pierson rounded out the field.