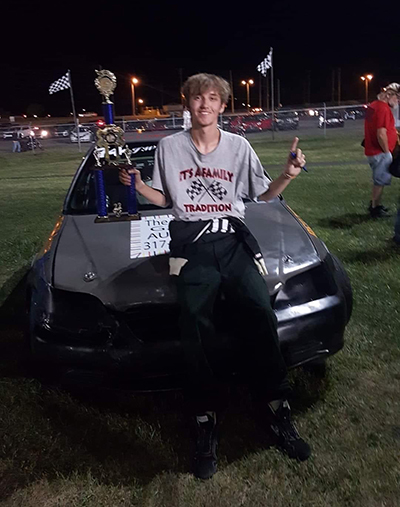 Blankenship took the lead at the start from the front row thanks to an inversion of four for the fastest qualified drivers. But on the fourth lap Blankenship was passed by Chuck Cook and two laps later Elliott McKinney moved into the second spot. By lap 5 Blankenship was running fifth as Cook and McKinney battled for the top spot. With McKinney leading the field chased by Cook, they soon lapped every car in the field except for Blankenship, who was running third. For 14 laps Blankenship was able to stay ahead of McKinney, who was passed for the lead on lap 56 by Cook. Three laps later McKinney’s night ended when he bounced off the turn two retaining wall, which put Blankenship into second and starting behind Cook on the restart. It appeared that Cook was going to score his second consecutive win but on lap 71 he slowed with an overheating car. That allowed Blankenship to win for the first time in his career and celebrate in the Riley & Son Victory Lane congratulated by several other drivers, including Cook. Terrill Wilhoit finished second followed by James Allender, Cook and Brad Miller.

The other first time winner was Chesterfield’s Alan Wagner in Victory Wrench Ford Division action. For the second time this season Wagner set fast time during qualifying and started the 75-lap race in the sixth spot. Ryan Krugler led the first four laps before being passed by Ricky Craig and James Mikesell on the front straight. It was a rough night for Mikesell, looking for his third consecutive win, when for the first of two times lost the right front tire. Craig led until lap 48 when Wagner used the high line to take the point entering turn three. He survived a final restart on lap 68 when Mikesell lost the same tire for a second time. At the finish Wagner won by 1.7-seconds over Craig with Austin Ward, Michelle Barrett and Shelbie Crabtree rounding out the top five.

Anderson’s Ronnie Rose took the lead for the final time on lap 54 of the Noble Wine & Spirit ThunderCar feature to score his first win in the division since 2020. Rose’s victory broke the string of feature wins by James Kirby III and Jimmy Kirby. Four different drivers took turns at the point before Rose inherited the lead when Jimmy Kirby was sent to the tail of the field for making contact with Dennis Hayes. Kirby recovered to finish second to Rose followed by Ron Phipps, Craig and Randy Owens.