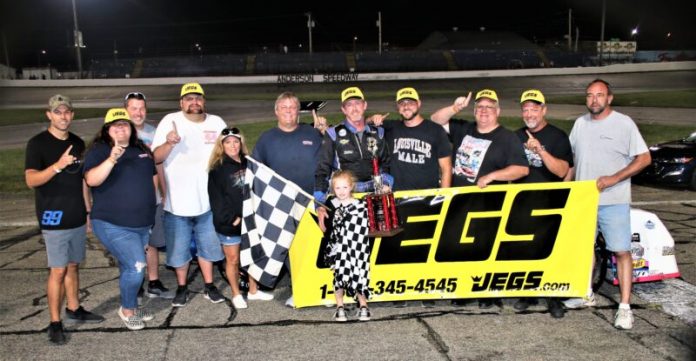 New Castle driver Jason Atkinson looking to sweep the Four Crown events led the first two laps as a result of the inversion following qualifying. But it was Andrew Teepe that took the lead on the third circuit as the front runners all ran in tight quarters. Atkinson reclaimed the lead on lap 35 on a restart with Teepe losing seven positions after being caught in the second groove following a caution on lap 51. For the next 51 laps Barnes chased Atkinson with Dalton Conner and Brett Hudson close behind. The race was red-flagged for a three car tangle that saw Marcus Elliott make hard contact with the turn three wall with the cars of Brian Hopkins and Jordan Hahn involved.

On the restart Barnes used the high groove to take the lead from Atkinson with Hudson moving into the second position on lap 123 with an outside pass. Barnes went on to win by 1.5-seconds over Hudson with Atkinson claiming the Four Crown’s title with his third place finish. James Kirby III recovered from a spin on lap 62 to come home in fourth with Teepe settling for fifth. Hudson said his car was better on long runs and was hoping for a final caution after passing Atkinson. Dalton Conner making his first career start in a Street Stock started third in the 25 car field and finished sixth. Fast qualifier Josh Poore of Anderson raced consistently in the top five but was never able to crack the top three, finishing eighth.

Morristown’s Jeff Marcum continued his dominant season at Anderson Speedway but had to hold off Billy Hutson at the finish. Marcum took the lead from J.P. Crabtree on the fifth circuit and opened a comfortable lead with Hutson moving into the second spot on lap 21 of the Tom Wood Honda 100. Things heated up in the closing stages of the race as Marcum encountered the cars Crabtree and Buddy Davis battling for position. That allowed Hutson to pull up to the rear bumper of Marcum, but the leader was able to get inside of the Davis and Crabtree to secure his fourth win of 2021. Hutson finished .3-seconds behind Marcum with rookie Kyle Worley claiming the third spot.