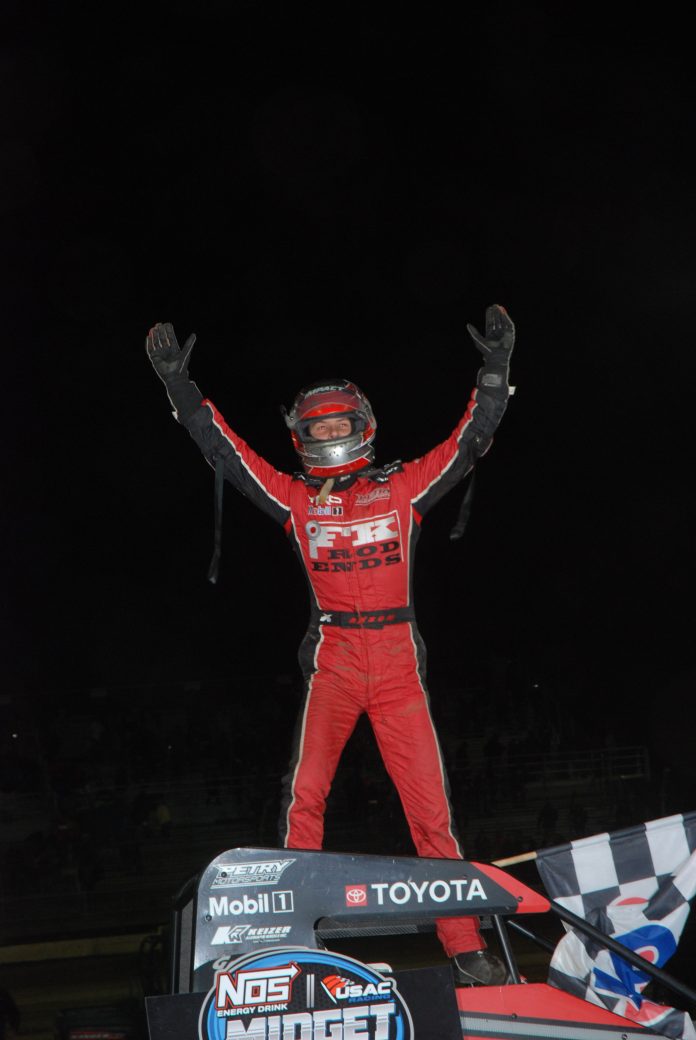 Axsom, the Franklin, Indiana native, currently is 3rd in USAC Midget points and 2nd in POWRI Midget points and has three wins between the two series. The 16-year-old picked up his first USAC NOS Energy Drink Midget win during the Kokomo Grand Prix in April. In addition, he finished 5th during USAC Indiana Midget week. Axsom will compete in new racing discipline that is vastly different then the midget he competes with on dirt.

“I grew up around the Nolen Racing shop with Gene (Nolen) and Hunter Schuerenberg,” explained Emerson Axsom. “Gene use to say when I was younger that he wanted to make me the youngest Little 500 starter ever. Well, things have transpired, and I was able to test with the team. The test went well, and they decided they want me to take part in the open practice tomorrow and race on Saturday!”

During Tuesday’s test at Anderson Speedway, a familiar face was seen in the pits, Kyle Hamilton. Hamilton was the 2017 Little 500 winner and recently decided after this years Little 500 that he was stepping away from racing to dedicate more time to his young family and career.

“I went to school to be a teacher,” said Hamilton. “Being able to work with young drivers like Emerson and my brother Nick is a great way for me to stay involved in racing. Emerson is very calm and does very well under pressure. He never seems to lose his cool, which makes him very easy to work with.”

“Kyle and I go way back,” said Axsom. “When I first started racing .25 midgets, Kyle use to travel with me. He is great at explaining to drivers how to race on pavement. He is good at “dumming” it down for dirt racers.”

Axsom will race the same Bill Trantor powered V6 that the team has dubbed “Flamer”. It is the iconic yellow car with purple flames on the hood. Kody Swanson won two Little 500’s in 2018 and 2019 in the same car. Kody’s brother Tanner competed in the car for the 2021 Little 500 and finished in the third position.

“I know I have a really good team and really good car,” exclaimed Axsom. “I want to qualify good and put myself up front for the race!”

The CB Fabricating Glen Niebel Classic is scheduled for Saturday, July 10. Racing is set to begin at 7:30pm. Non-Wing Sprint Cars, Champion Midgets, Day Transportation Mel Kenyon Midgets, and Thunder Roadsters will all be in action.  Adult Tickets $15, Kids (6-12) $5, Ages 5 and under Free.