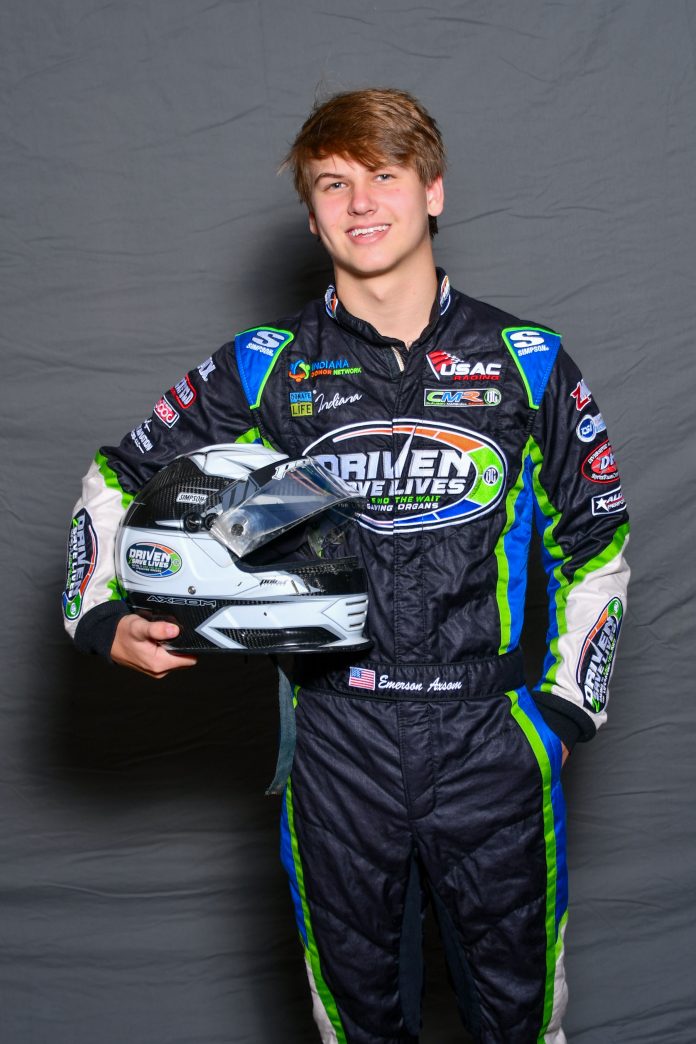 Emerson Axsom has partnered with Driven2Save Lives and Nolen Racing for his first attempt at the Lucas Oil Little 500 Presented by UAW. The 16 year old USAC (United States Auto Club) National Sprint Series points leader will be taking a break from his busy schedule to compete in the prestigious event. A native of Franklin, Indiana, the Little 500 has always been a favorite event for Axsom.

“I’m excited”, Axsom said about the opportunity. “I’ve been coming here since 2013 or ‘14, and I’ve been here ever since. I’ve watched the Little 500 growing up and it’s always been my favorite race to go watch. It has a lot of meaning for me. I have a picture of my Dad and I the first time I came here”.

In 2016, the Indiana Donor Network started the Driven2Save Lives program to raise awareness on the importance of being an organ donor. Since the inception of the program, countless race fans have signed up to be organ donors. When Axsom turned 16, he said “Yes” to being an organ donor. He carries on a legacy left behind by fellow racers Justin Wilson and Bryan Clauson, both of whom tragically passed away in racing accidents and saved multiple lives by being organ donors.

“It means a lot”, Axsom said about his partnership with Driven2Save Lives. “Part of racing is you have to believe in yourself, but you also have to have a lot of people who believe in you as well…I’m really excited and I think we will do really well in the race. We are with a really good team, so as long as I do my job we will be just fine”.

Memorial Day weekend may be Axsom’s first attempt at the Little 500, but it will not be his first time competing on Anderson’s famous oval. After running three sprint car races in 2021, Axsom has three top 10 finishes and two top fives. Having raced here before gives Axsom the knowledge and confidence he needs to contend for a win out of the gate.

“It’s good to have run here before. We know who is fast here and who is tough to beat. We know what we have to do to gain speed to win. The Little 500 isn’t all about speed, but you have to have speed to have a shot at winning. If we find a little bit of speed and have some luck go our way, we will be as good as anybody”.

Axsom stated that the team does not have specific goals that they have set as of this point in time. “As long as you give yourself a shot to win”, he said. “There isn’t anything you can be mad about if it doesn’t go your way”. Going into the longest race of his young career, Axsom has not waivered from his regular preparations. He believes that his youth will prove to be helpful for him in his preparation. Also, he believes the amount of races he competes in during the year helps with his racing maturity. “I have around 90 different races on my schedule for this year”, Axsom stated. “With how often I race, I believe my maturity within a race car is as high as anyone’s”.

Axsom, and Nolen Racing, have began preparations and testing on their #47BC Driven2Save Lives entry, the same car that Kody Swanson piloted to victory in back to back Little 500 victories (2018-2019). With qualifying less than one week away, the team will turn their focus on finding speed in the race car, and Axsom will focus on doing everything he can to give them a shot at the end. The 74th Annual Lucas Oil Little 500 Presented by UAW will be held on Saturday, May 28th at 8pm. Fans can watch the Race LIVE on Mavtv Plus with a special rebroadcast taking place on Sunday, May 29 at 9:00am – 12:00pm on MAVTV Motorsports Network.