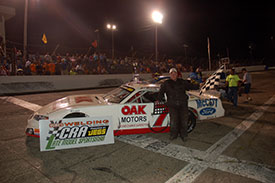 New Castle’s Jason Atkinson inherited the lead with three laps remaining when leader Jeff Marcum spun to capture the CRA/McGunegill Engine Performance Late Model feature at Anderson Speedway.The place not to be in the final 20 laps was battling for the lead when first Jack Dossey III and Danny Trent were involved in an incident while fighting for the top spot.Marcum took the lead from Atkinson on the restart on lap 54 and appeared to be heading to the win when the caution flag waved on lap 72 for a spin by Quinnten Bear.On the restart Marcum spun in turn two, after trading paint with Atkinson as the two fought for track position. That set Marcum to the tail of the lead lap where he finished tenth.Atkinson was able to survive the final restart to record his first win of the year in the Vore’s Welding CRA Late Model Sportsman race.“I’ve had nothing but bad luck here this year,” Atkinson said in the Tim Thompson Nationwide Insurance winner’s circle.When asked about avoiding the first lap melee, Atkinson said he was able to keep his car on the bottom of the track, which kept him out of trouble.Finishing second was Billy VanMeter, Greg VanAlst, Trent and Kent Baledge.VanAlst and Baledge ran in or near the top five during the entire distance but the driver to watch was Trent, who was looking for his fourth win of the year at Anderson Speedway.Trent who started last in the field had one of the fastest cars on the track moving into the second spot on lap 38 with an inside move on Jason Atkinson on the back straight and started closing on leader Dossey.Misfortune struck on lap 53 when Trent attempted an inside pass of Dossey entering turn three, contact was made with both cars spinning. Trent suffered a flat tire and along with Dossey was relegated to the rear of the field.Before the 20-car field made it through the first corner, pole sitter J.P. Crabtree got loose which triggered an eight-car incident bringing out the red flag. Of the eight cars involved there were only the cars of Chris Hacker and Fred Hopkins were unable to return to action.Dossey set fast time during qualifications with a lap of 12.99-seconds.