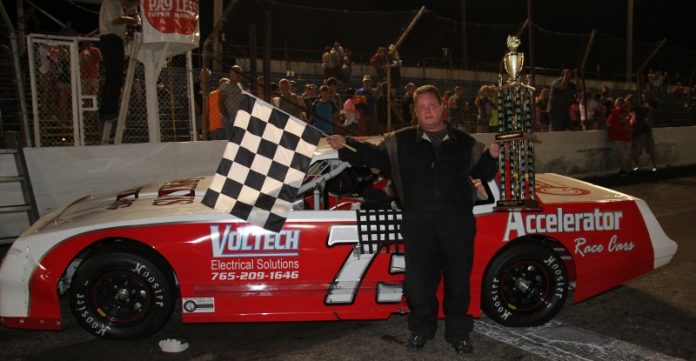 New Castle driver Jason Atkinson dominated in the second half to win the last of the Triple Crown events for the Champion Racing Association Street Stocks at Anderson Speedway.

Atkinson set fast time on Saturday and started ninth in the field following the inversion. He cracked the top five by lap 45.

Following a restart on lap 74, Atkinson passed Andrew Teepe for the third spot, and Shawn Smith to move into the second spot behind race leader Brett Hudson.
The third and final caution period of the night waved on lap 84 when Justin Oberlin spun in turn four and collected the car of Cory Adams.
It was the opportunity Atkinson needed starting outside of Hudson on the restart he used the outside line to take the lead on the front straight.
Following the mid-race break, Anderson’s Josh Poore, who started 19th after a mechanical problem during qualifications, passed Atkinson for the lead on the back straight.
Poore opened a gap on Atkinson and Teepe when his engine let go on lap 108, ending a strong run.
From there Atkinson was able to maintain a comfortable lead over second place running Teepe and Hudson, lapping all but the second and third place cars.
Mason Keller recovered from a flat left rear tire early in the race to finish fourth with Calvin Parham rounding out the top five.
It was Atkinson’s second consecutive win of the annual 200-lap race for the Street Stocks.
The first 100 laps provided an excellent crowd with plenty of exciting racing as the top five cars ran nose to tail.
The early lead was taken by Kentucky driver Shawn Smith but he surrendered the spot on the fifth circuit to Hudson using a power move to the outside in turn one.
With Hudson on the point Smith stayed in close contact with the leader with Teepe moving up from the eighth starting spot to run third after 65 circuits.
With his third place finish Hudson claimed the Triple Crown championship and the $1,000 bonus.
The Triple Crown consisted of races at Shady Bowl Speedway, Kentucky Motor Speedway and Anderson.
Randy Hoppes made it three consecutive feature wins in the Thunder Car Division taking the lead from Alan Lambert on the second circuit and was never seriously challenged
.
Jerry Swinford Jr. came home second followed by Lambert.
Curtis Chapman finished the winner’s circle for the first time in more than a year by winning the Hart’s Auto Figure-8 feature.
Chapman led the entire distance to record the win and was challenged by Ron Phipps for most of the race.
Nick Warner rounded out the top three.