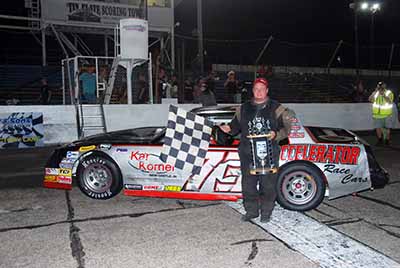 New Castle driver Jason Atkinson used the correct tire management strategy to capture the Tom Wood Honda 150 Saturday night. On Knapp Supply Night, Atkinson set fast time during qualifying and as a result of the invert started ninth in the 20-car field. Andrew Teepe took the lead from the pole position in the Champion Racing Association’s Four Crown Series race for the Street Stocks. Atkinson moved into the top five after 20 laps behind Teepe, Brett Hudson, Chuck Barnes Jr. and Dale Harper. Hudson took the lead on lap 42 with an inside pass of Teepe on the front straight with Barnes and Atkinson slipping into the second and third spots before the mid-race break.

On the restart Atkinson quickly moved into the third spot and following the second caution period of the night passed Barnes on the front straight and closed in on Hudson. The final caution flag waved on lap 111 when Chad Pendleton made contact with the turn three retaining wall while running in the top five. Atkinson took advantage on the restart to pass Hudson with an outside pass on the front straight and went on to win by 1.6-seconds over Hudson with Barnes, Harper and Mark Eads Jr. rounding out the top five. It was Atkinson’s third win in the Four Crown Series and fifth overall with the CRA Street Stocks.

Kyle Frame used the right strategy to win the D & J Sales 75-lap Vore’s Compact Touring Series event. The race featured a virtual pit stop, a first for the VCTS. The drivers were required to make one complete stop in the crossover during the race. Frame along with most of the field made their required stop early in the race. Fast qualifier Chris Jennings along with Jake Albright and Derek Robinson decided on a strategy to stop late in the race.

Jennings took the lead from Bo Hoelscher on lap 10 and led to lap 35 when he made the mandatory stop. That put Alrbright on the point chased by Frame, Tom Gossar and Hoelscher. Albright pitted on lap 44 which put Frame into the lead chased by Gossar and Hoelscher. Gossar took the lead on lap 50 with an outside pass of Frame on the front straight. The driver on the move was Jennings charging back through the field and running third when the final caution flag waved on lap 68. Frame powered by Gossar on the restart to win by 1.6-seconds with Terry Eaton Jr., Jennings and Albright rounding out the top five.

For the second consecutive feature event there was a first time winner in the Legends Division with Shirley driver Drew Evans leading the entire distance. Dalton Conner and Xavier King rounded out the top three.