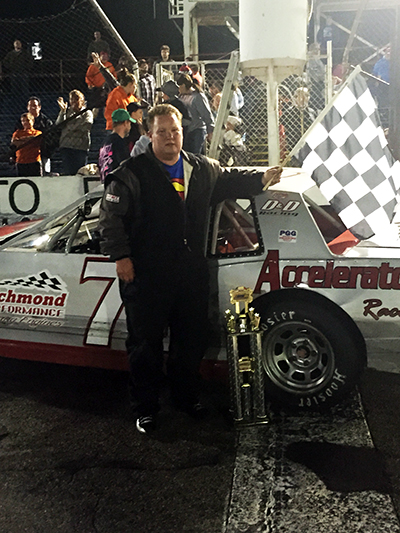 With the victory in the final event of the CRA Triple Crown, Atkinson captured the point title within the season point chase.

Atkinson slipped outside of Josh Poore following a restart on lap 93. For the next 70 laps remained in front of Ryan Amonett and Poore.

Poore got around Amonett with 37 laps remaining and closed onto the rear deck lid of Atkinson’s car as the two leaders made their way through slower traffic.

At the finish Atkinson won by a half-second over Poore, who was racing with his third engine of the day.

The race was slowed only four times by caution periods, only once over the final 100 laps.

Fast qualifier Colby Lane was never in contention for the lead and finished eighth. Lane won the first of the Triple Crown races at Shady Bowl Speedway in Ohio.

Ryan Claborn led all 25 laps to record his first feature win of the year in the Marcum Welding Pro Compact Division.

With Claborn opening a comfortable lead there was a spirited battle for the second spot with Nick Warner grabbing the positon with a pass of Terry Neal on the next to last lap entering turn one.

There was a complete restart after TJ Fannin made contact with the turn three outside retaining wall. Claborn for the second time was able to get the jump on Neal to take the point.

John Robbins scored his first victories of the 2015 season in the Legends Division by capturing the fast heat race and then capturing the feature race.

Robbins took the lead from Ryan Miller on lap four with an inside pass on the front straight after the two battled side by side for the opening laps.

He had to survive two Interstate Auto Auction restarts first holding off Josh Dietz and then Miller in a five lap shoot out. Miller spun on lap 24 while running second on the back straight.

Robbins was followed to the checkers by Adam Sturgill, Gerad Miller, Mike Carroll and Eric Black.