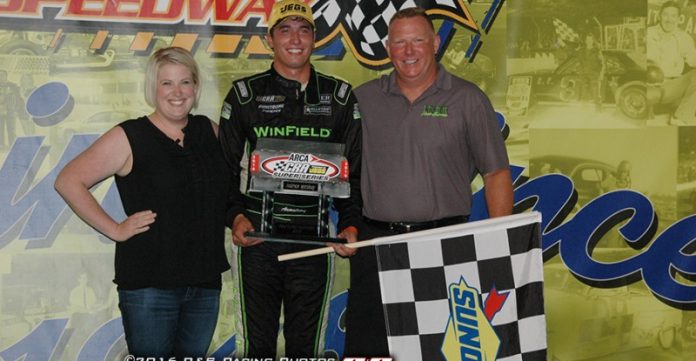 New Castle driver Dalton Armstrong turned in a dominating performance to win the 50th running of the Redbud 300 on Saturday.
Armstrong led 266 of the 300 laps of the Redbud 300 presented by Mitch Smith Auto Service and Perfecto Tool & Engineering for the Champion Racing Association Super Series late models, but he had to survive two restarts in the final 12 laps.
Armstrong took four tires at the break and surrendered the lead to two-time Redbud winner John VanDoorn, who opted to take two tires.
On Lap 185, Armstrong got outside of VanDoorn entering Turn 3, as VanDoorn lost the handling on his car and faded back quickly through the field.
Armstrong opened a comfortable lead over Bubba Pollard and William Byron when the caution flag waved on Lap 288, setting up a 12-lap shootout. No lap was completed when Pollard spun in Turn 2.
Over the final five laps Armstrong pulled away to win by 1 second over Crown Point driver Wes Griffith. Steve Dorer, Yorktown’s Rick Turner and Pollard rounded out the top five.
Griffith started 11th in the field and got into the second spot on the final restart.
Dorer finished third after starting 17th in the field and drove the final laps with an injured left hand after a spin by Cole Anderson. Slowing to avoid Anderson’s car, Dorer had the steering wheel whip out of his hand.
The race was slowed only seven times by the caution flag for a total of 36 laps.
Armstrong dominated the first half of the race, leading all 150 circuits and was never seriously challenged for the point.
Pollard ran second until Lap 97 when fast qualifier VanDoorn made an inside pass quickly followed by Griffith.
The top five at the halfway break were Armstrong, VanDoorn, Griffith, Pollard and William Byron.
The first half was slowed by four cautions, including a three-car melee on Lap 54 when point leader Cody Coughlin lost a rear end while running third and spun coming off the fourth corner.
With nowhere to go, Trent Snyder and Dalton Sergeant suffered heavily damaged cars and were unable to continue.