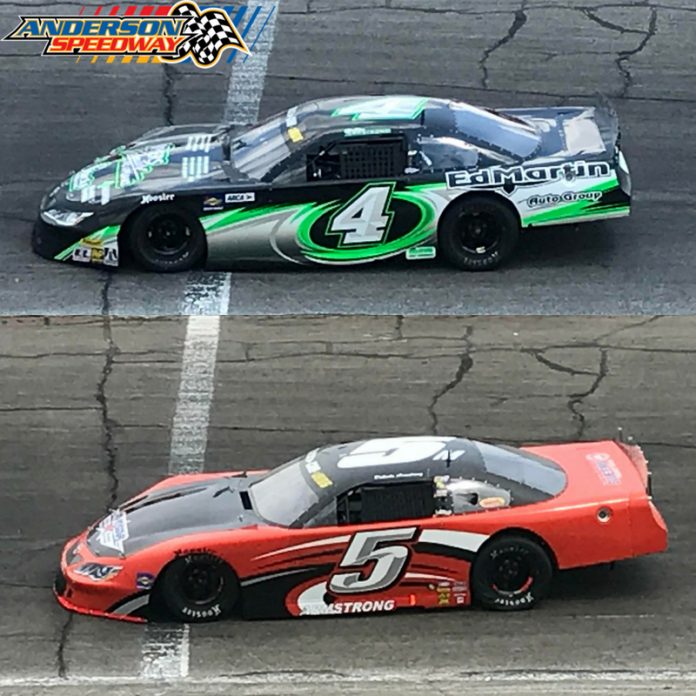 The last time the brothers were on track together was in pavement midgets at the famed Turkey Night Grand Prix at Irwindale Speedway in 2011. Cousin Caleb Armstrong ended up winning the Turkey Night Grand Prix against Kyle Larson, Brian Clauson, and Jason Leffler.
Dakoda and Dalton grew up racing Karts, Kenyon midgets, USAC Midgets, and Non-wing sprint cars. In 2009 Dakoda made the jump to Automobile Racing Club of America (ARCA) for Cunningham Motorsports. He was able to progress in 2010 and pick up an ARCA win at Talladega Super Speedway. Armstrong continued to climb the ladder and drove in both NASCAR Truck, and Xfinity Series. His best finish of third came in the Xfinity Series last year in the Firecracker 250 at Daytona International Speedway. Dakoda stepped out of the Xfinity Series in September and has not been in a race car since. “My plan is always to get back into NASCAR,” said Armstrong. “I am just excited to be here (at Anderson Speedway) and get back into a race car. This is a long 400 lap race, but it will give me time to re-learn the race car.”

Dakoda Armstrong will be driving for Richie Wauters Motorsports and making his second ever start in a super late model. “Super Late Model racing is still new to me,” explained Dakoda Armstrong. “Dalton has been a huge help especially on the line around the track. It is nice that I have someone to ask questions and support me.”

Dalton is partnering with longtime car owner Scott Neal for their first race of 2018. This is his second start of 2018 after racing in the Rattler 250 at South Alabama Speedway. Dalton won the 2016 JEGS/CRA All Star Tour Championship paired with Neal. Dalton also picked up the win in the 2016 Redbud 300. Last year the race didn’t go as well as the year before. He qualified in the 15th position after rain threatened the track all weekend. When the race began he made early contact with the wall and retired after 18 laps in 21st position.

“My goal is to make it to the end of the race,” said Dalton Armstrong. “The race has an extra 100 laps from when I won in 2016. You have to make it to the end, to win the race.”
Dakoda, living in North Carolina, came back in late May to be a spotter for cousin Caleb in the 70th Pay Less Little 500 presented by UAW-GM. Interest was shown by both drivers to join cousin Caleb in racing in the Little 500 one day.

The entry list has four former winners in the field. Joining Dalton Armstrong as a past winners Steve Dorer, Johnny VanDoorn, and Steve Wallace.

Tickets for the 52nd Annual Parallax Power Supply Redbud 400 presented by Mitch Smith Auto Service and Perfecto are on sale today. You can save $5 per adult ticket by purchasing them in advance. You can purchase tickets by coming to the main office at the track or calling (765) 642-0206 ex. 21. The last day to buy advance tickets is Saturday Night. Adult Tickets – $25, Kids (6-12) – $10, 5 and under Free.