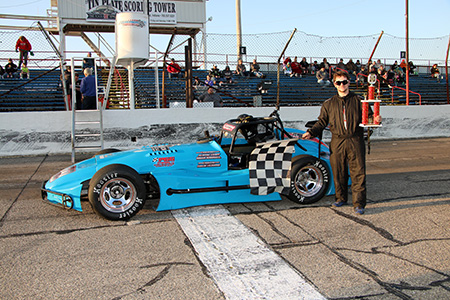 When the three front runners in the Thunder Roadster feature were eliminated it was Austin Cory scoring his first career win. Anderson Speedway kicked off the 74th year of racing action with two first time winners on Saturday.

Chad Cory took the lead at the start but it only lasted a lap when fast qualifier Doug Dugger moved to the point on the second circuit with a pass coming off the second corner. Jason Powers got inside of Chad Cory the next lap with an inside pass entering turn three and gave chase on Dugger. Disaster struck for the front runners on lap 21 when Dugger was pinched against the outside retaining wall on the front straight by the lapped car of Steve Holland. Behind that contact Chad Cory and Powers made contact with both spinning through the infield grass resulting in heavy damage to both roadsters. Austin Cory went on to win for the first time followed by Bryan Eberly and Ed Klingaman Jr. Austin Cory, known as “Turtle” works on the Thunder Roadsters owned by Dugger, three of which were damaged.

In only his fourth race ever Albany’s Dawson West led the entire distance to win the Hart’s Auto Center Ford Division race. West was pressed throughout the feature race by Gerry Isgrigg Jr. holding on to win by 4-tenths of a second. Fast qualifier James Mikesell came home in third.

New Castle driver Jimmy Kirby made it a clean sweep in ThunderCar action setting fast time and winning both the heat and feature races. Michael Phipps took the early lead from the pole position chased by Earl Adams II and David McConnell. Kirby started sixth in the feature as a result of the inversion. Adams took the lead from Phipps on the fourth circuit with defending champion Ron Phipps and Kirby moving into the second and third spots. The leaders ran nose to tail until lap 14 when Kirby passed Ron Phipps for second entering turn one and a lap later used the high line to pass Adams for the lead on the back straight. From there Kirby pulled away, but for the next 15 laps there was a heated battle between Adams and Phipps. Adams claimed the runner-up spot at the finish by four one-hundreds of a second.