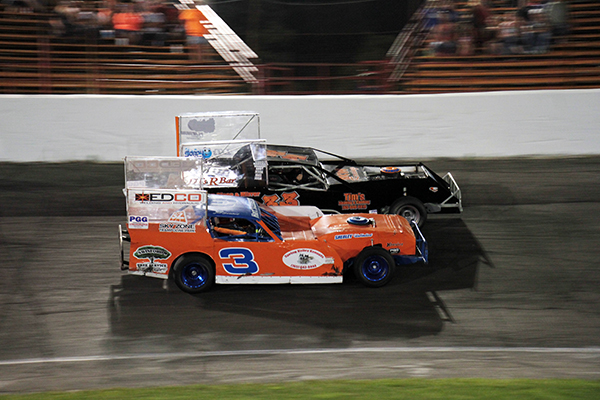 Three champions were crowned at Anderson Speedway on Saturday with the Swinford family claiming two titles.

The full range of human emotion was on display during the championship deciding last point’s race for the Marcum Welding Pro Compacts at Anderson Speedway.

Entering the feature race Ron Phipps had a 25-point lead over Jeff Williams with the two contenders starting on the front row on Saturday.

The two raced side by side on the first lap with Williams maintaining the lead when Kyle Allmond spun in turn four.

On the Ivy Tech restart Phipps car failed to accelerate and he spun on the front straight before a lap could be completed. With his car sitting in the infield, Phipps climbed out rapidly looked under the front of his car before taking off his driver’s suit shirt. Race over.

Phipps sat dejectedly on the infield pit road, the result of a broken axle, and watched Williams drive to the championship.

Williams led all 30 laps having to twice hold off defending champion Matt Tharp on two restarts to win by 3.5-seconds with Nick Warner, Allmond and Kyle Keeley rounding out the top five.

Although Jeff Swinford experienced a problem in the rear end of his Hart’s Auto Figure-8 car the Noblesville driver claimed his second consecutive title.

Swinford entered the night with a dominating lead over Shawn Cullen and had the championship locked up.

Cullen led the first lap with Swinford a close second when Cullen’s night ended when his car lost a driveshaft, collecting the car of Josh Tharp in the first corner. Tharp’s crew made the necessary repairs for him to continue.

Swinford took the lead on the restart and opened a comfortable lead over Curtis Chapman when the drive to the winner’s circle was halted.

With Swinford’s car noticeably slowing Chapman took the lead on lap 25 to record his fourth win of the season with Tharp moving into the second spot on lap 29.

Jerry Swinford Jr. captured the Thunder Car championship with a third place finish, his first championship in 20 years of racing at Anderson Speedway.

Jeff Swinford took the early lead chased by fast qualifier Jeremy Threet and Justin Sapp. But on the fourth circuit Swinford slowed which gave Threet the lead and he drove to his first feature win of the year.

Kares attempted several times to pass Goodin for the win but couldn’t get the momentum to use the outside groove.