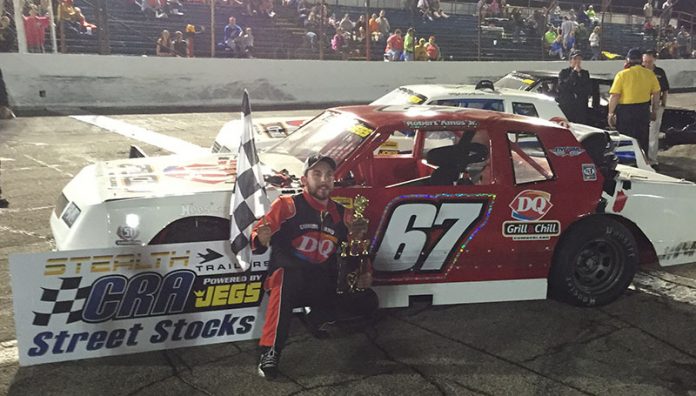 When the two front runners made contact with three laps remaining Robert Amos Jr. took the lead from his father on the restart to win the 75-lap CRA Street Stock feature at Anderson Speedway.

The last of eight caution flags waved on lap 72 when leader Josh Poore was tapped by Colby Lane in turn three. Poore spun to the infield and both drivers were sent to the tail of the field.

That put Robert Amos Sr. on the point with his son alongside for the final restart with Danny Adams running a close third.

The younger Amos took the lead on the front straight and held on for the victory followed by Amos Sr., Jacob McElfresh, Adams and Jason Atkinson.

Amos Jr. said in the AutoFarm McCrocklin Ford Winner’s Circle that it was his first feature win ever in any form of racing.

Through the first 67 laps Lane, looking for his third consecutive win, battled with Jimmy Kirby for the top position. Poore took the lead for one lap  when he got inside of Lane coming off the second corner.

Defending Thunder Roadster champion John Robbins made it two consecutive wins as he passed Rodney Oliver with an inside move on the third lap.

There was a good battle during the middle stages of the race for the fifth spot between Oliver and Darrell Brown, with Brown finally claiming the position with an inside move coming off the fourth corner.

Swinford looking for his second win of the year took the lead at the start with Chapman glued to his rear bumper. On the 13th circuit Chapman got inside of Swinford and the two made contact in the corner. The resulting contact had Chapman’s car ending up on the top of Swinford’s car.

Chapman was able to continue after a quick stop in the pits and was able to pass Nick Warner with nine laps remaining to record the victory. Warner finished second with Larry Southerland coming home in third.