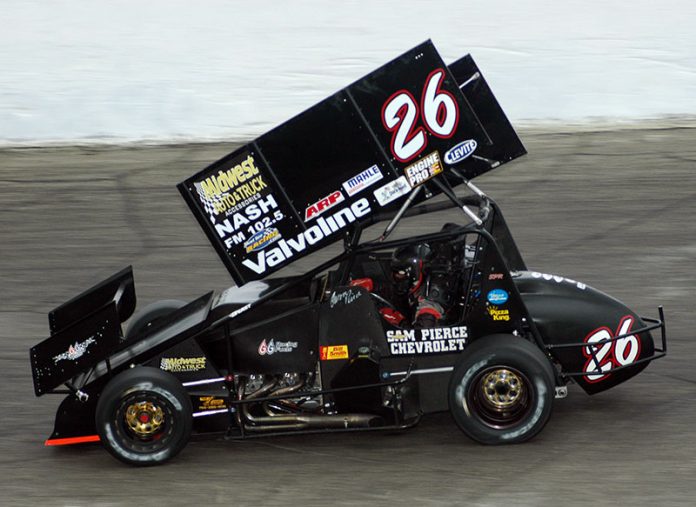 Pierce turned in a dominating performance to win the longest winged sprint feature ever at Anderson Speedway on Saturday, August 30.

Pierce took the lead from Ryan Gillenwater on lap 43 of the MoFab Labor Day 200 presented by Hoosier Park Racing & Casino for the Must See Racing winged sprint series.

Starting third Pierce got inside of Jimmy McCune on lap 37 to move into the second spot.

Six laps later he drove underneath Gillenwater entering turn three to take the lead and started pulling away from the rest of the field.

Pierce, the winner of the August 16 tune-up race for the series, pulled into the Tim Thompson Nationwide Insurance Winner’s Circle for the third time in his career in a winged sprint at Anderson Speedway.

He was followed to the checkers by Jimmy McCune and Chris Neuenschwander, the only other drivers on the lead lap.

Gillenwater brought out the second caution flag on lap 95 when he made contact with the turn two wall while running second.

Two-time Pay Less Little 500 winner Jacob Wilson was forced to retire at the halfway break with an engine problem.

While Huggler was pulling away from the field, there was a five -car battle for the second spot.

Travis Young held on to the second spot by holding off Amanda Davies, Jessica Bean, and Clayton Gaines.

Fast qualifier Dameron Taylor was making a run from the sixth starting spot when he made contact with Bean’s car, lifting the front-end off the pavement.

Jessica Bean led all 40 laps to capture her second Mel Kenyon Midget Series victory of the year in the rained out race from Aug. 23.

Bean started on the pole position and was chased the entire distance by rookie Colton Dooley and Cameron Taylor.

Amanda Davies brought out the first caution flag on lap 15 when she spun in turn four while battling for the sixth position. Before another green flag lap could be turned Ryan Huggler bounced off the front straight wall on the restart.

Once the race resumed Beam drove away to win by 4.5-seconds over Dooley, Taylor, Logan Huggler and Travis Young.

On Saturday, September 6 the CRA Street Stocks return to Anderson Speedway. They will be joined by NASH FM ThunderCars and Pro Compacts.