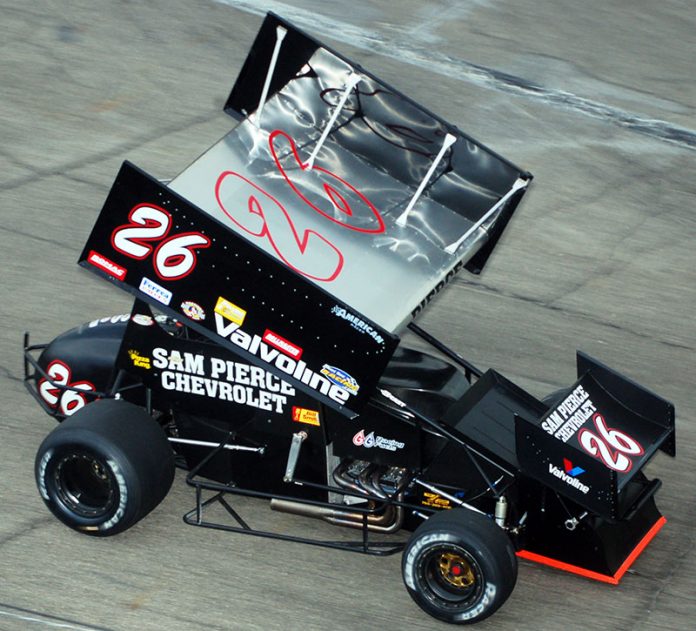 Daleville’s Aaron Pierce won in a winged sprint car at Anderson Speedway for the first time since 2010 and returned to victory lane in dominating fashion.

Pierce jumped into the lead at the start and led all 50 laps en route to winning by 1.6-seconds over Davey Hamilton Jr.

This was the last appearance of the Must See Racing Xtreme Sprint Series before the Labor Day weekend 150-lap race, the longest event the winged sprint series will run all season.

It was Pierce’s second career win in a winged sprint car at Anderson Speedway.

Pierce built up a straight away lead over Hamilton and Jimmy McCune by the 30-lap mark, but as he approached lapped traffic Hamilton closed to within several car lengths.

But once Pierce cleared the slower traffic he again pulled away from the field. Hamilton finished second followed by McCune, Jo Jo Helberg and fast qualifier Brian Gerster.

The race was slowed only one time for a spin on lap nine by Dave Bumgarder in turn three.

Gossar took the lead from his father, Tom, on a lap two restart with an inside pass entering turn one. Tom Gossar got stuck in the high groove and dropped back to fifth.

From there Trent Gossar was pressed for the first two-thirds of the race by Robbie Wyman, Curtis Chapman and Lonny Burton.

Lapped traffic had the front-runners from three wide in the corners with Wyman able to hold off Chapman.

Wyman entered the race with only a 10-point lead over Chapman in the race for the championship.

Phipps took the lead from Marshall Clark on lap five with an inside pass entering turn one.

The race was red-flagged on lap 12 for a three-car tangle in turn four involving Jerry Dane, running sixth at the time, Benjamin Short and Jesse Thomas.

Following the restart Phipps was able to maintain his lead while four drivers battled nose to tail for the second through fifth positions.

On Saturday, August 23, the Wick’s Pies Retro Weekend will showcase an exciting on track racing lineup along with Vintage Car Show with Classic Car, Motorcycle and Tractor Show.

The 18th Annual Grant Fritz/Greg Dietzen Memorial featuring the Legends and McGunegill Engine Performance Late Models in the PGG 100 presented by Thompson Builders headline the on-track action. The Kenyon Midgets and Thunder Roadsters will also be part of the racing lineup.