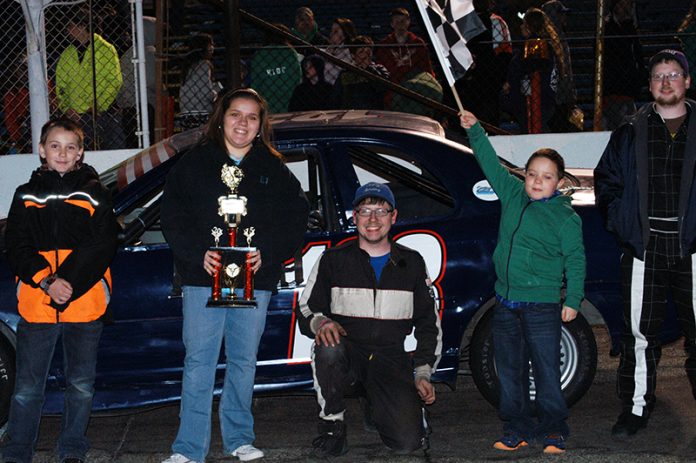 There are drivers over the years that have recorded clean sweeps in a particular division at Anderson Speedway, but none quite as impressively as Adam Lee.

A clean sweep for a driver is setting fast time, winning the fast heat race and topping the night off with a feature victory.

Lee accomplished all that on Saturday, but it marked the first time in his career that he set fast time, won a heat race and scored victory in a feature race in the Marcum Welding Pro Compacts.

The New Castle driver took the lead from Brandon Cook on lap four with an inside move on the front straight. No one was able to challenge Lee, except on the four restarts.

Behind Lee there was plenty of action as Matt Tharp, Andy Jennings, Randy Hoppes and Cook battled for the second through fifth positions.

Cook who was black-flagged on lap nine for turning several laps faster than his qualifying time, methodically starting working his way back to the front. On lap 17 he passed Hoppes to move into the fourth spot and two laps later got inside of Jennings on the front straight.

Cook moved into the second spot on lap 21 with an inside pass of Jennings exiting turn two. Matt Tharp and Ryan Claborn rounded out the top five.

“I’m pretty excited,” Lee said after his perfect night. “I was surprised everyone was racing so clean, it was fun racing.”

Lee passed Cook with four laps remaining in the first of two heat races to record the victory. He was followed by Andy Jennings and Joe Jennings.

Ron Phipps, driving the Newco Metals sponsored car grabbed the lead from the start of the second race, surrounding it to Randy Hoppes on the fourth lap.

But Hoppes was black-flagged on lap seven for turning laps faster than his qualifying time, which put Phipps back on the point.

Phipps survived the green-white-checker finish followed by Hoppes, who passed Billy Hooten on the penultimate lap on the back straight.