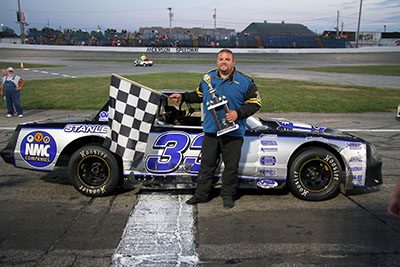 Knightstown veteran competitor Calvin Parham provided his own birthday present by winning the Season Championship Street Stock feature at Anderson Speedway. Throughout the 35-lap event there was a four car battle for the top spot on Advanced Dental Care night on Saturday. Champions in six division were unofficially named following the racing action, including five first time champs.

Jake Owens took the lead at the start from Parham, who was the quick qualifier, with the two front runners chased by Josh Poore and Fred Hopkins. With Owens on the point there was plenty of bumping and banging between Parham and Poore as they battled for the preferred low racing groove. The only caution flag waved on lap 29 for a spin by David Diggs in turn two which set up a seven-lap race to the finish. On the restart Parham was able to make the pass of Owens using the high line down the back straight to take the lead. Parham won by .46-seconds over Owens followed by Poore, Hopkins and Tyler DeHart. Parham said he believes his last Anderson Speedway victory also came on his birthday about five years ago. For the third time in four years Poore won the Vores Welding & Steel Street Stock title.

Dustin Sapp won for the fifth time in PGG Enterprises Thunder Car action this season but was pressed for the entire race distance by Jerry Swinford Jr., Dylan Hoppes and Ron Phipps. After setting fast time Sapp took the lead from the start with Phipps and Hoppes locked onto his rear bumper. The running order didn’t change until Phipps slowed with a mechanical problem on lap 25. For the next eight laps Hoppes tried in vain to get inside of Sapp to claim the top spot. The caution flag waved on lap 33 when Swinford and Hoppes locked bumpers with the end result being Hoppes spinning in turn one. At the finish it was Sapp winning by .41-seconds over Swinford with Hoppes coming home in third. Sapp was unofficially crowned champion of the division.