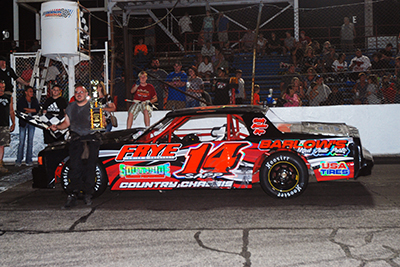 Dustin Sapp added his name to the long list of winners in the 70th running of the National Crown at Anderson Speedway. Sapp led all but one lap of the 50-lap National Crown on Saturday for the PGG Thunder Cars on Edgewater Woods/ Sugar Fork Crossing Night. Although Sapp led for most of the night he was never able to pull away from the other cars running on the lead lap, winning by a half-second over Curtis Chapman.

Sapp, who set fast time during qualifying, took the lead at the start chased by Dale Harper, Chapman, Robbie Wyman and Ron Phipps. Wyman dropped back in the early stages of the race with an apparent mechanical problem, but was saved on lap 18 when the race was red-flagged. Randy Owen made contact with the third turn outside retaining wall after a scramble with Josh Hampton. That allowed Wyman to pit without losing a lap. On the restart Harper took the lead with an outside move of Sapp on the front straight, but on the next circuit Sapp was back in front.

Harper lost the second spot to Chapman on a restart on lap 24 with Harper losing positions to Phipps and Nick Warner. The third caution flag waved on lap 34 when Jerry Swinford Jr. spun in turn two. On the restart Harper and Wyman, working his way back to the front, passed Phipps. A final caution flag waved on lap 40 when Earl Adams made contact with the turn three retaining wall setting up a 10-lap sprint to the finish. Chapman tried to get around Sapp on the restart while Wyman moved into third with a pass of Harper entering turn three. The three front runners ran in a tight formation until the checkered flag waved with Harper holding on for fourth and Dylan Hoppes coming home in fifth.

In McGunegill Engine Performance Late Model action Zachary Tinkle took a big step toward winning the championship. There was close racing throughout the feature race among Tinkle, Tom Miller, J.P. Crabtree and Jaren Crabtree. Miller led at the start with J.P. Crabtree glued to his rear bumper. Tinkle spun on lap 16 in turn two while running third and was relegated to the tail of the field. The complexion of the race changed on lap 23 when Miller spun in turn two following contact with J.P. Crabtree, sending both drivers to the back of the pack. Tinkle passed Jaren Crabtree for the lead on lap 19 entering turn three and survived two more restarts to record his second win of the year. He won by 1.3-seconds over J.P. Crabtree with Jaren Crabtree, Miller and Kent Carson rounding out the top five.

Entering the night Tinkle had a 43-point lead over defending champion Jeff Marcum. That margin was extended when Marcum didn’t compete.

Michael McKinnon for the second time in three appearances in Marcum Welding Front Wheel Drive action set fast time during qualifying and went on to win both a heat race and the feature event. McKinnon made a dramatic three-wide pass for the lead on lap eight getting inside of both Elliott McKinney and Ricky Craig coming off the fourth corner.

Michael Phipps won the Hart’s Auto Figure 8 feature for the second time in 2019 and Connor Kosowski won the CSR Super Cups feature for the third consecutive time dating back to 2018.