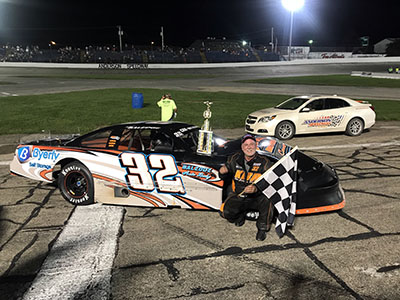 Three caution flags with just four laps remaining jumbled the field with Alexandria driver Kent Baledge emerging as the winner of the Champion Racing Association Sportsman Late Model race.
Two-time defending Anderson Speedway Late Model champion Jeff Marcum led the first 71 laps but was pressed the entire distance by Baledge and then Brandon Varney on Thompson Insurance and Cintas Night at the Races on Saturday at Anderson Speedway.
Varney turned up the heat with 10 laps remaining repeatedly trying to get underneath Marcum’s car in the corners.
The caution flag waved on lap 72 when Marcum spun coming off the fourth corner after slight contact with Varney, sending both drivers to the back of the pack.
That put Baledge out front chased by Cassten Everidge and Chris Shannon. The caution flag immediately waved for a spin into the turn one wall by Rich Segvich.
The third attempt at a restart resulted in a three car incident coming off the fourth corner eliminating the car of Dustin Burge. That put Marcum in second followed by Varney.
Baledge was able to maintain the lead for his first CRA career win by .365-seconds over Marcum who saw his winning streak stopped at eight, with Varney, Everidge and Shannon rounding out the top five.
New Castle’s Jason Atkinson picked up the victory in the CRA Street Stock race locking himself into the championship chase race in October.
Andrew Teepe led the first 58 laps with Atkinson, Danny Adams, Travis Burge, Jimmy Kirby III and Jacob McElfresh all jockeying for position.
Atkinson moved back into the second spot on a lap 20 restart with an inside pass of McElfresh in turn three and stayed glued to Teepe’s rear bumper.
Following a spin by Kirby on lap 59 by Kirby it was the opportunity that Atkinson needed to use the high line to pass Teepe entering turn one.
Atkinson had to survive three more restarts with Adams passing Teepe on lap 74 and Burge making the pass of the former front runner in turn four.
Adams came back from an incident with J.J. Schafer on lap 24 to drive to the runner-up finish. In the three CRA Street Stock races at Anderson Speedway Adams has recorded two second place finishes and scored his first career win.
For the fifth time in six appearances by the K&M Tool & Die Mel Kenyon Midget Series Dameron Taylor recorded the victory.
Taylor moved into the second spot after 17 laps with an inside pass of Trey Osborne entering turn one and started to close on leader Kameron Gladish.
When the caution flag waved with eight laps remaining for a spin by Ryan Huggler it allowed Taylor to take the point on the restart with an inside pass of Gladish coming off the fourth corner.
Tom Gossar Jr. claimed the victory in the Vores Company Touring Series feature by passing Andy Jennings with six laps remaining.