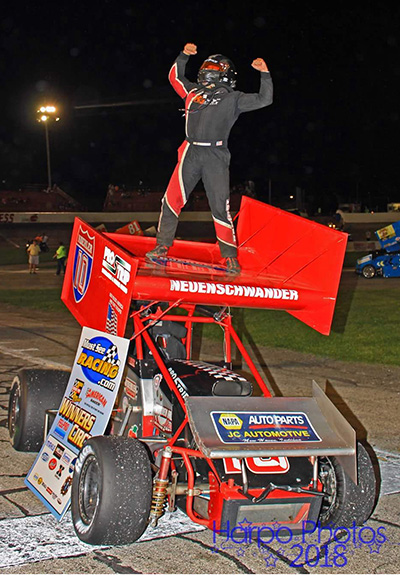 After winning the Must See Racing 50 for winged sprint cars Chris Neuenschwander said his car was as good to drive as it was to watch.
Starting sixth in the field the New Haven driver took advantage of the high line coming off the second corner to pass Jimmy McCune and Jeff Bloom to move into the second spot after two laps.
On the third circuit Neuenschwander got inside of early leader Tom Jewell exiting the fourth corner and from there it was smooth sailing for the front runner.
It was Neuenschwander’s first victory in a winged sprint car at Anderson Speedway since 2013 on Saturday.
With Neuenschwander extending his lead Jimmy McCune moved into the second spot after eight laps with an inside pass of Jewell entering turn three.
But the driver to watch on Suzette’s Bail Bond Night was Neuenschwander as the drove inside and outside of slower cars to continue to extend his lead over McCune, who was seeking this third consecutive win at Anderson Speedway.
Christian Koehler experienced a mechanical problem near the bid point while running fourth.
Fast qualifier Anthony McCune was slated to start eighth in the feature event following the inversion but the red flag waved on the initial start with Jerry Caryer spun in turn two with four cars coming to a stop.
McCune restarted the race in the tenth spot and was running fifth after 20 laps, but didn’t take the third spot until lap 33 with an inside pass of Jewell entering turn three.
Neuenschwander won by 7.8-seconds over Jimmy McCune, the only driver on the lead lap at the finish.
Anthony McCune came home in third followed by Charlie Schultz and Jewell.
Indianapolis driver Dameron Taylor started 13th in his first winged sprint race and drove to a sixth place finish. Taylor won the first of two heat races.
Thunder Roadsters
For the first time in his career Muncie driver Rodney Oliver won a feature race for the Thunder Roadsters.
Oliver has been fast all season during qualifications but has not been able to find his way to the winner’s circle.
Taking the lead at the start Oliver was able to hold off Jed Cotterman, Chad Cory, Dave Osborn and Gregg Cory for the 25-lap distance.
Oliver only led the pack running nose to tail for the top six positions for most of the race by a few yards.
Every time he would open the gap back to Cotterman, the pack would again reel him in.
At the checkers Oliver won by .168-seconds.
Thunder Cars
Anderson’s Ronnie Rose recorded his fifth feature win of the year making it a clean sweep by posting fast time during qualifications and recording the heat win.
Rose took the lead from Ron Phipps with an inside pass coming off the fourth corner and survived a restart with four laps remaining.
Phipps spun with three laps remaining while batting for third with Tyler Dehart. Following the restart Phipps was able to climb back through the field to finish second followed by DeHart.