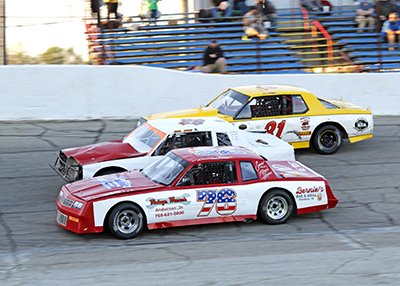 It’s the longest continuous stock car race in the country starting in 1950 at Anderson Speedway. Herchel White won the first ever National Crown and it has been at the top of every driver’s bucket list for the past 72 years. The National Crown for many years was the top race for the Figure-8 Division but since 2019 the Thunder Cars have been in the spotlight. The Beaumont Rehabilitation and Healthcare Center National Crown tops the Saturday racing program that includes the Marcum’s Welding Front Wheel Drive Division, Hart’s Auto Ford Division and Legends.

The same car has won the past two National Crown events, but with different drivers at the wheel. It was Dustin Sapp winning in 2019 in the car he owns and Josh Myers won the National Crown for the first time last year in Sapp’s car. This year Jimmy Kirby has been a multi-time winner in Thunder Car feature action chased all season by Ron Phipps, Earl Adams and Michael Phipps. With $1,000 going to the winner a strong field of competitors can be expected.

The last time the other three divisions were in action, it produced first time winners in 2021. David Powell captured the Front Wheel Drive divisions most recent feature, Chris Workman took home the honors in the Ford Division and Drew Evans won the Legends event.

Qualifying is set for 6 p.m. with racing at 7:30 p.m. Adults tickets are $13, children at $5 and children five and under are admitted free.