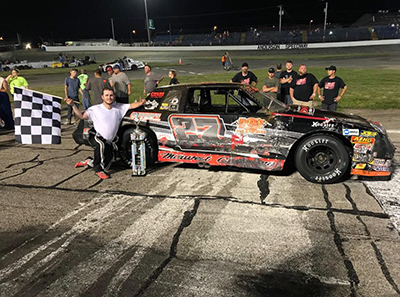 ANDERSON, IN – Local driver Josh Poore led the final 100 laps of the Sport Clips 200, but the outcome on Saturday at Anderson Speedway wasn’t determined until the final lap.
Poore captured the second race in the Champion Racing Association’s Street Stock Five Crown series within a series but had to hold off Indianapolis driver Danny Adams.
Except for a red flag shortly after the halfway break that impacted the outcome the race was caution free.

Poore took the lead on lap 101 from Knightstown driver Calvin Parham, who led the first 100 laps, with an outside pass on the back straight. Parkam also lost a position to defending race winner Brett Hudson, Ryan Amonett and Adams.

While running third Amonett was forced to pit because his hood came loose and the crew worked quickly to remove it.

With Amonett returning to the action entering from the pit road in turn three, he got into the racing line. That forced Hudson, running second at the time, to make hard contact with the turn three retaining wall and collected the car of Josh Lank. Both driver were uninjured but it knocked Hudson, the fast qualifier from competition.

Poore started to pull away after the restart chased by James Kirby III and Adams.
Kirby and Adams swapped the second spot several times with Adams making the decisive move on lap 143.

From there Adams starting slicing into Poore’s lead and with 20 laps remaining was running on the leader’s rear bumper.

Several times Adams looked to the inside in an attempt to grab the lead but Poore wouldn’t surrender the preferred line. On the final lap Adams went high in turn one to attempt the pass but his car slipped coming off the second corner.

Poore won by two-tenths of a second over Adams with Kirby, Parham and Elwood’s Jacob McElfresh rounding out the top five.

Parham took the lead at the start from the pole position and led until the break but there was plenty of action among the top seven drivers.

Hudson and Poore staged a side by side battle for the third spot in the middle stages of the first 100 laps with Poore claiming the position and challenged Parham for the lead before the break.

Dustin Sapp scored his first ever feature win in the Thunder Car Division when leader Ronnie Rose was black-flagged as smoke poured from the back of his car.
Rose was looking for his third consecutive win and took the lead on the second lap from Sapp until his night ended on lap 22.

Sapp was followed to the checkered flag by Earl Adams II and Tyler DeHart.