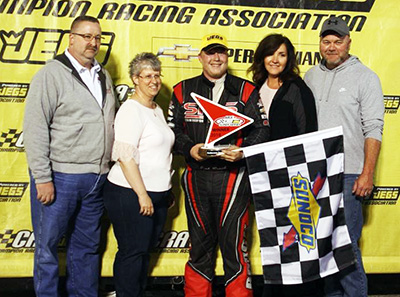 What a difference a year has made in the live for Kentucky racer Josh Brock who recorded his first ever CRA Super Series event Saturday at Anderson Speedway.

Last July Brock was near the top of the point standings in the Super Series and JEGS All-Stars Tour when he was diagnosed with cancer. The led to putting his racing career on hold while being treated and was declared cancer free in January.

Brock led the final 54 laps holding off Austin Kunert to win the AERCO Heating and Cooling 125 by .285-seconds and taking home the winning purse of $5,000.

He set fast time during qualifying and started fifth following the inversion.

Brock took the lead on lap 71 from Carson Hocevar after the leaders scrambled with some slower traffic. Hocevar was forced high which allowed both Brock and Kunert to slip past.

To secure the win Brock had to hold off Kunert through six restarts including the final one with three laps remaining after a spin by Billy VanMeter on the back straight.

Brett Robinson, who started tenth in the field, drove to a third place finish followed by Cayden Lapcevich and Kyle Crump.

Robinson didn’t break into the top five in the running order until the midpoint of the race.

Logan Runyon led the first 53 laps of the race with Hocevar in hot pursuit. But a strong run came to an end on lap 54 when the car of Mike Simko spun in turn two and collected the car of the leader.

That put Hocevar in the lead with Kunert and Brock applying the pressure.

Justin Brown took the lead from Ron Masters on a restart on lap 15 to record the victory in Vore’s Compact Touring Series action.

It was Brown’s second career win with the series at Anderson Speedway but he was forced to hold off Chris Jennings over the final 14 laps for the victory. Masters who led the first 15 laps came home in third.

In a wild Hart’s Auto Figure 8 feature Anderson’s Kyle Allmond making his first career start in the crossover recorded the victory when he passed Ronnie Phipps with five laps remaining.

With Allmond in the lead Jared Keller and Bruce McFall both passed Phipps to claim podium finishes.
Randy Owen made it two consecutive wins in Marcum’s Welding Front Wheel Drive action taking the point on the second lap from Josh Doggett.

Jerry Loy and Nick Warner rounded out the top three.