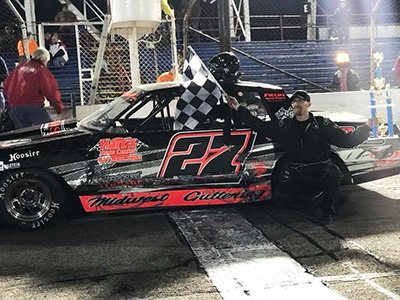 It was a different driver in the car that took Josh Poore to the Street Stock championship at Anderson Speedway last year but the result was the same on Saturday.
Travis Burge captured the opening feature race of the season for the Vore’s Welding & Steel Street Stocks holding off a charging Jimmy Kirby III over the final laps.
Muncie’s Nathan Greene led the first 12 laps with Burge, Elwood’s Jacob McElfresh, Kirby and Andrew Teepe battling for the second spot.
Burge swapped the second spot with Kirby near the mid-point of the 30-lap feature as the two ran side by side.
After claiming the second spot Burge was able to get outside of Greene entering turn one on lap 12 to claim the point.
The trailing six cars were racing in a tight bunch when Greene got bumped from behind on lap 15 in turn four which scattered the field without a caution flag waving. Kirby III, Jimmy Kirby, McElfresh and Teepe all advanced.
With five laps remaining Kirby III closed on the rear bumper of Burge’s car as the two front-runners made their way through slower traffic.
Burge held on to win by .313-seconds over Jimmy Kirby III, Jimmy Kirby, McElfresh and Jaren Crabtree.
Defending Thunder Roadsters champion Dave Osborn took advantage of the invert following qualify to lead all 25 laps to record his first feature win of the year.
The start was delayed for one lap when last week’s winner Doug Dugger spun in turn one and the car of Greg Cory made contact with the outside retaining wall.
Although Osborn led the entire distance he was pursued by Chad Cory, Dugger, fast qualifier Rodney Oliver and Bob Lemons.
Osborn won by .273-seconds over Cory and Dugger.
In their first appearance at Anderson Speedway Brandon Huff won the CRS 50-lap feature taking the lead from early front-runner Mike Brooks on the 19th circuit with an outside move in turn one following a restart.
Bobby Schramm and fast qualifier Jeremie Wiggins rounded out the top three.
Tom Boorsma passed Brian Beukema entering turn three with an inside pass on the 10th lap to win the VORA Modified feature. Jason Burrus came home in third.