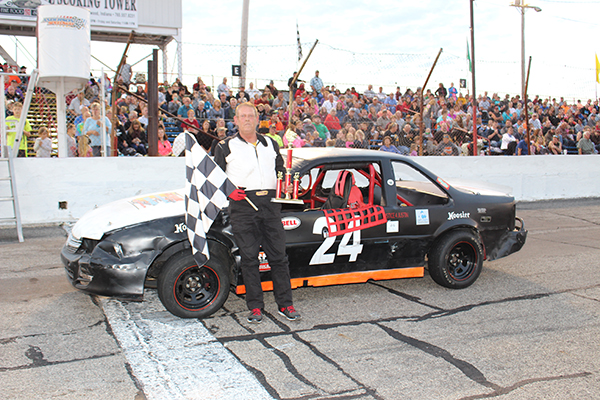 There were three first time winners and school buses crashing in Figure-8 action during the Night of Thrills at Anderson Speedway.
With Governor Eric Holcomb in attendance on Saturday night sponsored by The Herald Bulletin, Hoosier Park Racing & Casino, Mitch Smith Auto Service and Perfecto fans were treated to a rare sight in the school bus Figure-8 competition.
Travis Burge led almost the entire distance despite numerous near misses in the cross over as the field was spread out enough to have the intersection almost blocked.
Coming to the checkered flag Burge took evasive action from a slower bus and was hit in the grassy area to the south of the cross over.
That allowed Rickie Tharp to claim the victory to the delight of the crowd.
Tharp dedicated the victory to his father and long-time Anderson Speedway racer and track worker, Rick, who passed away a week ago.
The action started early with the Marcum Welding Front Wheel Drive feature with the first caution waving on lap four when Matt Tharp made contact with the outside retaining wall on the back straight.
On the restart four cars were involved in a tangle in turn two knocking out of contention for the win point leader Ron Phipps, Kevin Harmon and Randy Owens.
That put Rushville driver Bill Overshiner on the point and he was leading when on lap 12 Shane Reed make contact with the turn four wall.
Overshiner went on to record his first career feature win followed by Jerry Loy and Camden
Creek.
Anderson’s Creek would score his first career feature win in the “corkscrew” race following a spirited battle with Owens.
The two drivers swapped the lead four times at the corkscrew, where the cars turn a tight oval around a stationary object.
Creek made the final pass for the lead on the next to last lap with Owens finishing second followed by Nick Warner.
Elliott McKinney passed Owens with 12 laps remaining to win the Front Wheel Drive Figure-8 feature with Kevin Lane finishing third.
Kyle Allmond won the Trailer race Figure 8 event.