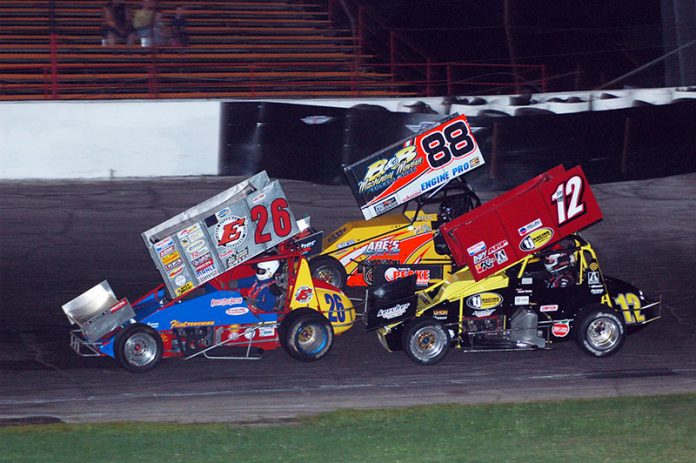 Some of the fastest competitors to take to the lightning fast Anderson Speedway will be in action on Saturday when the Must See Racing Winged Sprints make their only 2017 appearance.
The Must See Racing 60 is the featured event on Intersect Night at the Races presented by AERCO Heating and Cooling.
The racing card includes late models, Thunder Roadsters and the second appearance of the Legends Division leading up to the annual Grant Fritz/Greg Dietzen Memorial race.
Recent winners in the Must See Racing Series include Ohio driver Jimmy McCune, three wins at Anderson Speedway and Noblesville resident Brian Gerster, looking for his first career at the speedway.
The winged sprints turn laps on the high banked quarter-mile oval in the 10.5-second range or an average speed of more than 85 miles per hour.
Last weekend Scottie Tomasik won the PGG Enterprises Late Model Shootout holding off Jeff Marcum in the 100-lap event.
Defending track champion Jeff Marcum has recorded three feature victories in 2017 with Aaron Pierce and Kent Baledge both claiming wins. In two appearances by the Champion Racing Association Sportsman Late Models R.J. Norton III and Tony Brutti claimed their first career wins.
Frankton resident John Robbins has scored all five feature wins in the Thunder Roadsters division and will be looking to keep his streak alive.
James Edsall III won the first Legends feature of the year besting Robbins.
Qualifying is set for 6:30 with racing at 8 p.m. Adult tickets are priced at $15 and $4 for children between the ages of five and 12.