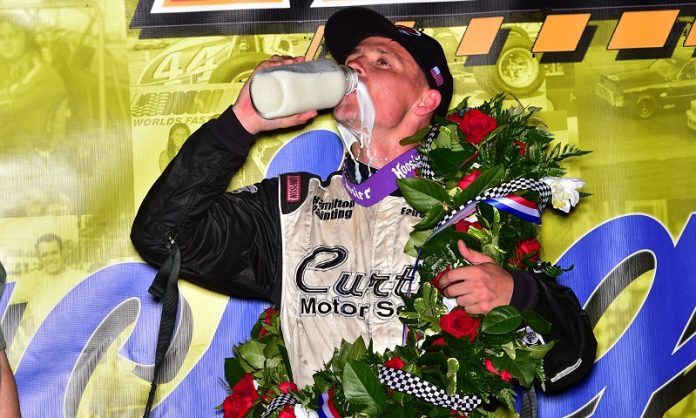 69th Annual Pay Less Little 500 presented by UAW-GM Results
Before a sold out crowd Kyle Hamilton captured the 69th running of the Pay Less Little 500 for the first time Saturday at Anderson Speedway.
Hamilton driving the Klatt Motorsports entry took the lead on lap 468 after making contact with race leader Kody Swanson as Shane Cottle was exiting out of the pits.
Swanson spun to a stop in turn two and took the opportunity to make his final stop.
That gave Hamilton a one-lap lead on the field. But the drama wasn’t over with Bobby Santos III getting back on the lead lap with 14 circuits remaining.
Santos settled for second followed by Tony Stewart, two laps down, Swanson and Caleb Armstrong.
The outcome of the race was decided on lap 351 when Kyle Hamilton pitted and lost a lap to the leaders Kody Swanson and Bobby Santos III.
Hamilton got back on the lead lap on the 410 circuit with Swanson and Santos having to make a final mandatory pit stop.
With 75 laps remaining Swanson was in need of a pit stop as his car was starting to skate through the corners on old tires.
Hamilton got around Santos moving into the second spot with 60 laps remaining. At this point it was Hamilton’s race to win having used the right pit strategy.
Hamilton has won at Anderson Speedway in the Mel Kenyon Midget Series but this was the biggest win of his racing career.
Fans were treated to some great racing among the front runners for the first 100 laps with Caleb Armstrong, Kyle Hamilton and Swanson battled for the top spot.
Hamilton and Swanson passed Armstrong on lap 103 when the New Castle driver got high in turn two.
Following the first round of pit stops before the 200-lap mark, Shane Cottle emerged as the leader chased by Armstrong and Jacob Wilson. Tony Stewart was running fourth.
Swanson took the lead on lap 285 with an inside pass of Cottle on the front straight and pulled away from everyone else in the field except for Bobby Santos III.
Swanson was turning laps in the 11.8-second range while most of the other leaders were clocking laps in the 12.-second area.
The red flag waved on lap 121 when Armstrong spun on the back straight to avoid contact with another car and Aaron Pierce with nowhere to go flipped. Pierce was not injured.
Pierce’s misfortune was a bit of luck for Armstrong. Had Pierce not flipped and brought out the red flag stopping the race, Armstrong would have lost several laps under a normal caution condition which would have ended any chance of victory.